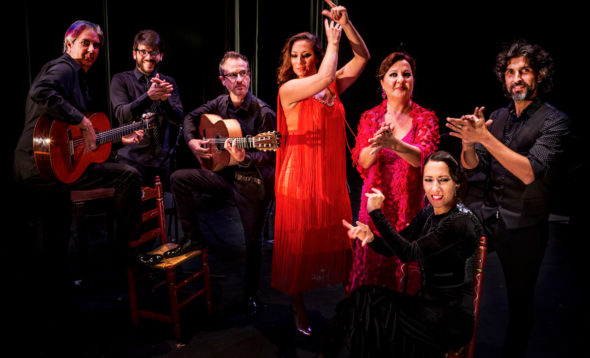 Carmen Linares, Marina Heredia, Arcángel, María Pagés, Jesús Carmona, La Chana, Isabel Bayón, Rafaela Carrasco… For its 15th anniversary at Sadler’s Wells, the Flamenco Festival London searches beyond the classic image of the flamenco dancer, rediscovering forgotten spirits and reclaiming women’s stories as they seek to discover the characters of the women themselves.

Flamenco Festival London 2018 shatters the clichés about women in Flamenco and breaks free of stereotypes.

This year’s 15th anniversary Flamenco Festival London offers a vibrant spectrum of flamenco from the traditional Gypsy roots to its modern-day incarnations, performed by some of the world’s most outstanding and legendary flamenco dance and music talent. One of the most significant cultural events of the city, Flamenco Festival London returns from Wednesday 15 to Sunday 25th February 2017 under the banner Woman and Creation, representing the varied styles of this celebrated art form with a selection of performances that go beyond its traditions by opening new roads. This is a great opportunity to see leading figures of the flamenco ‘baile’ (dance), with María Pagés, Jesús Carmona, Isabel Bayón, Rafaela Carrasco, Úrsula López, Tamara López, Leonor Leal, Ana Morales or a legend like La Chana, accompanied by Antonio Canales, Farru and Gema Moneo; ‘cante’ (singing) such as Carmen Linares, Marina Heredia. Arcáncel, Alba Molina, Alicia Morales or Angelita Montoya; and other gifted musicians such as Rycardo Moreno, Antonia Jiménez, Guillermo Weickert or Nasrine Rahmani, to name just a few. All of them are creators who investigate in their own universes to generate new discourses.

In February, this unmissable event for the flamenco London aficionados returns to its headquarters at the prestigious Sadler’s Wells, one of the most renowned dance venues in Europe, through which the most important companies of the international scene pass every year, such as American Ballet Theater, Alvin Ailey Dance Theater, Tanztheater Wuppertal Pina Bausch and Nederlands Dans Theater, among others.

Flamenco Festival’s opening show will be Tempo of Light on Wednesday 14 February. It features some of the world’s greatest flamenco voices, revered singer Carmen Linares and brilliant rising stars Arcángel and Marina Heredia, flamenco guitarists Miguel A. Cortés and José Quevedo “Bolita” and percussionist Paquito González. They are joined by the outstanding Ana Morales, former dancer of Ballet Flamenco de Andalucía to portray the passion that underpins this time-honoured art form, from its gypsy roots through to its modern innovations.

María Pagés Compañía presents Yo, Carmen from Thursday 15 – Saturday 17 February. The undisputed queen of modern flamenco, María Pagés’ vibrant ode to womanhood fuses flamenco with poetry, in this beautiful and radical reimagining of Bizet’s opera. In Yo, Carmen Pagés she is accompanied by seven dancers and seven of Spain’s most talented musicians.

Considered a genius of his generation, Israel Galván returns to Sadler’s Wells on Tuesday 20 February in collaboration with Isabel Bayón Compañía. In Dju-Dju, classical dancer Isabel Bayón reinvents herself, exploring the demons and superstitions of the flamenco world, alongside dancers Alicia Márquez and Nieves Casablanca.

Legendary flamenco artist La Chana makes a rare appearance at this year’s Gala Flamenca, running from Wednesday 21 – Friday 23 February. Her amazing story is testament to the strength and passion of this art form, providing hope and encouragement to young women globally. Four champions of flamenco puro, artistic director Ángel Rojas and dancers Antonio Canales, El Farru and Gema Moneo, come together to celebrate her inspiring story of survival and empowerment. La Chana will also be celebrated with a screening of the acclaimed 2016 documentary film La Chana, which looks at her life and career, in the Lilian Baylis Studio on Saturday 24 February.

For the penultimate show on Saturday 24 February, former dancer with Ballet Nacional de España, the charismatic Jesús Carmona and his dance company pioneer a flamenco evolution. With flawless footwork and ballet-infused moves, Ímpetus is an irresistible interpretation of famous scores from some of Spain’s most beloved composers.

Closing this year’s festival, on Sunday 25 February, Compañía Rafaela Carrasco presents Born a Shadow. Inspired by the hidden voices of female artists – Teresa de Jesús, María de Zayas, María Calderon and Sor Juana Inés de la Cruz – from the Spanish Golden Age, one of the most eminent flamenco dancers of her generation, Rafaela Carrasco, uses flamenco as a way for these women to speak through the centuries.

Women’s stories and artistry are also at the fore of an accompanying programme of performances in the Lilian Baylis Studio beginning on 23 February with Ana Morales with Guillermo Weickert who will present the results of a 10-day residency entitled Sharing of Songs for the Silence. Later that evening in Guitarrísimo: Entre Primas, musicians Antonia Jiménez, Alicia Morales and Nasrine Rahmani will perform original compositions celebrating the achievements of female flamenco artists.

ABOUT FLAMENCO FESTIVAL
Flamenco Festival is a non-profit organization dedicated to the promotion of Spanish culture around the world directed and founded by Miguel Marín. Flamenco Festival’s annual international events showcase the leading flamenco names of today, from world renowned artists and icons of traditional flamenco to the most innovative, emerging young stars of flamenco, dance music and song.

ABOUT SADLER’S WELLS
Sadler’s Wells is a world-leading creative organisation dedicated to dance in all its forms. With over three centuries of theatrical heritage and a year-round programme of performances and learning activities, its goal is to motivate everyone to experience dance – to take part, learn, experiment and be inspired. Audiences of over half a million come to Sadler’s Wells’ London theatres each year, with many more enjoying its touring productions at partner venues across the UK and around the world, or accessing its content through digital channels.
Sadler’s Wells commissions and presents more new dance work than any other theatre in the world, embracing the popular and the unknown. Since 2005, it has helped to bring over 140 new dance works to the stage, many of them involving its 16 Associate Artists, three Resident Companies and four Associate Companies – the most exciting talents working in dance today. It also nurtures the next generation of talent through its artist development initiatives, and reaches over 25,000 annually through its learning and engagement programmes
Located in Islington, north London, the current theatre is the sixth to have stood on the site since it was first built by entrepreneur Richard Sadler in 1683. The venue has played an illustrious role in the history of theatre ever since with The Royal Ballet, Birmingham Royal Ballet and English National Opera having all started at Sadler’s Wells. Sadler’s Wells is a charity and a National Portfolio Organisation, currently receiving 10% of its revenue from Arts Council England.