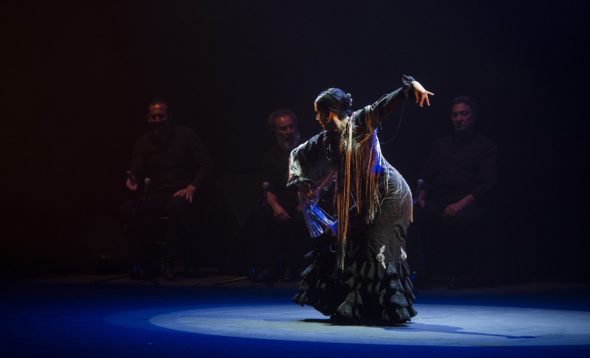 Flamenco Festival 2018 lights up New York City, Boston and Miami with amazing performances during this weekend, featuring some of the greatest Spanish flamenco artists.

The iconic Joe’s Pub at the Public will host during the weekend the unorthodox performances of virtuoso musicians that melt flamenco and other styles, such as singer, sax player and composer Antonio Lizana, to be joined later today at 9:30pm by local artists Albert Marquès, Noam Wiesenberg Music and Ari Hoenig; guitar playerRycardo Moreno (A Galeano, Saturday 10th), in the first date of Fundación SGAE’s series Flamenco Eñe during this XV Flamenco Festival edition; and flamenco-folk projectLa Banda Morisca (Las Huellas de la Memoria, Sunday 11th).

But Flamenco Festival also gets to other renowned stages, such as Miami’s Adrienne Arsht Center, that hosts Ballet Nacional de España‘s Suite Sevilla, directed by Antonio Najarro, today and tomorrow, and the Andalusian Voices of Carmen Linares, Arcángel and Marina Heredia, on Sunday. And the annual WorldMusic / CRASHArts date in Boston will feature Jesús Carmona‘s Impetu’s on Saturday and Eva Yerbabuena‘s Ayon Sunday, both shows hosted by the Berklee Performance Center.

Until March 25th Flamenco Festival will continue taking flamenco all over the US through the performances of great artists such as the legendary musical dynasties ofHabichuelas & O’Farrills, amazing musicians like Dorantes with Adam Ben Ezra and Tim Ries or young talents such as Niño de Elche, Rosalía & Raül Refree, Angelita Montoya, Naike & Paquete or Daniel Casares.

During its 15th edition in NYC, Flamenco Festival celebrates 18 years of taking ‘jondo’ art to the US, promoting the culture of dialogue through the exchange of flamenco with jazz and world music. Flamenco, and particularly its dance, the most recognizable Spanish artistic expression abroad, will be again featured in a festival that will tour North America during the month of March. A total of 41 concerts will be presented, 24 of them hosted by eight different venues in New York, and 17 will be shown across the US (Miami, Boston, Atlanta, Los Angeles, San Francisco, Irvine, Portland), and in Montreal, Canada.