HomeliveFlamenco Festival takes "the sounds of flamenco" to the United States 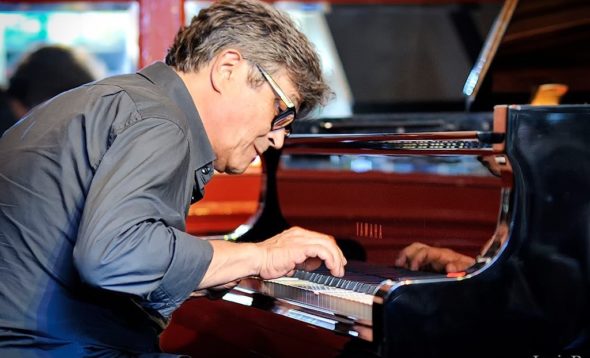 Flamenco Festival takes “the sounds of flamenco” to the United States

About to celebrate two decades of life, Flamenco Festival has become one of the most significant stable events of Spanish culture in the United States and the main platform for flamenco in the international cultural scene. The Festival returns between March 7th to 17th to take this World Heritage artistic expression, beyond the Spanish borders, in nine shows and a total of 26 performances, 12 of them in two different venues in New York, plus another 14 performances of ‘Flamenco Festival On Tour’ in Miami, Chicago and Washington DC.

The 2019 edition of Flamenco Festival USA, after gathering 45,000 spectators in the USA in 2018, turns towards “The sounds of flamenco” as the main topic that the event developes this year showing, beyond the dance, the musical richness of this art. This represents a commitment to flamenco music and its different expressions, with 8 concerts out of 9 that the festival schedules, representing the different colors of flamenco sounds today. As an exponent of flamenco dance, Flamenco Festival has a single proposal, but first level: the great flamenco ambassador, dancer Sara Baras.

The piano of Chano Domínguez, the guitar of Antonio Rey, the flute of Sergio de Lope, or the voices of María Terremoto and Ismael Fernández, show how flamenco finds its way to musical expression in different instruments. In this sample of different flamenco artists, classical players such as guitarist Miguel Ángel Cortés and cantaor Israel Fernández are also intertwined with those who make flamenco dialogue with other kind of music, such as Diego Guerrero.

The strong presence of a new generation of flamencos that symbolize the present and future of this art, for the first time on the New York stages, highlight in the program that Flamenco Festival New York 2019 has designed for the emblematic Joe’s Pub at The Public. In spite of her youth, the Jerez-born cantaora María Terremoto and the Toledan cantaor Israel Fernández show how starting from solid flamenco inheritance is posible to advance in the construction of an own artistic discourse as they exposed in their first recordings. Terremoto will present ‘La Huella de mi Sentío’ accompanied by Nono Jero (guitar) and José “El Pechuguita” (choirs) on March 9th; and Fernández, in collaboration with the World Music Institute, will present ‘Universo Pastora’ accompanied by Keko Baldomero (guitar) on March 10th.

Co-produced by the Instituto Cervantes, Sergio de Lope, winner in 2017 of the International Competition of Cante de las Minas de la Unión, presents with his ensemble the show ‘Ser de Luz’ on March 8th, an exhibition of how the dialogue with other music can be a creative argument that fills the flamenco expression with nuances and light. Antonio Rey, one of the best guitarists of his generation, arrives on March 9th with his show ‘Two Parts of Me’ in which he is accompanied by the dancer and cantaora Mara Rey. Closing the catalog of the youngest ones who perform for the first time in New York, on March 10th the musician Diego Guerrero presents his first album ‘Vengo Caminando’, nominated as ‘Best Flamenco Album’ in the past Grammy Awards, demonstrating how a new generation of artists have made dialogue with other music a path of infinite possibilities for creation.

Three other artists, with broad and outstanding careers, complete the program at Joe’s Pub. In collaboration with the World Music Insitute, on Thursday, March 7th the Sevillian cantaor Ismael Fernández, presents his show ‘Trato’, an emotional experience that achieves a direct connection with the public. After Fernández’ show, master Miguel Ángel Cortés will premier for the first time his own show in New York. It is about his ‘Sonantas en tres Movimientos’ that he will perform with the collaboration of Dani Bonilla (chorus and percussion) and Lucía Álvarez “La Piñona” (dance), closing the program of the day. On March 8th, the perfect integration between flamenco and jazz will resonate once again in the Joe’s Pub with Chano Domínguez‘s flamenco piano, that SFJAZZ magazine defines as, “one of the most outstanding musicians bilingual from Spain.”

But as the start of this 2019 edition of Flamenco Festival in New York, the Ballet Flamenco de Sara Baras returns to the New York City Center, with the show ‘Sombras’, on 7th, 8th, 9th and 10th March. This emblematic venue, which celebrates its 75th anniversary, welcomes once again the Cádiz-born bailaora, who already visited it in 2015, with this show that celebrates her 20 years on the stage.

And in this 2019, as in previous editions, the program is complemented with other activities that show the educational and formative aspect of this Festival; such as the Exhibition ‘Garabatos Flamencos’ by Ándrés Mérida that can be visited from 5th to 18th March at La Nacional, the presentation of the book ‘Black Sounds: On the Blacknes of Flamenco’ by K. Meira Goldberg on March 5th, at Martin Segal Theater, CUNY Graduate Center; or the dance classes that will be given at the NY City Center.

After New York, Flamenco Festival travels to other cities in the United States. Miami will host the Flamenco Festival once again. For the second year in a row, Fundarte presents the Flamenco Rave series at the Miami Dade Auditorium, which welcomes Sergio de Lope on March 9th, and the shows of FlamencoEñe by Diego Guerrero on March 9th, and María Terremoto and Miguel Ángel Cortés on the 10th. of March.

After 13 years of uninterrupted relationship, the prestigious Adrienne Arsht Center in Miami returns to host the Flamenco Festival hosting the Flamenco Ballet of Sara Baras and its ‘Sombras’ with 5 performances between March 13th and 17th.

In Chicago, the Old Town School, Szold Hall will host the shows of Diego Guerrero on March 6th and María Terremoto on March 13th, under the label FlamencoEñe.

In Washington DC, the former residence of the Spanish Ambassador will host the FlamencoEñe shows performed by Diego Guerrero on March 11th and María Terremoto on March 12th.

For the third consecutive year, the SGAE Foundation co-produces the FlamencoEñe cycle, while the Instituto Cervantes co-produces the show ‘Ser de Luz’ by Sergio de Lope. FlamencoEñe cycle integrates the concerts of Miguel Ángel Cortés, María Terremoto and Diego Guerrero in New York, Miami, Chicago and Washington DC, with the aim of continuing to convey that the deep roots of flamenco are in continuous creative regeneration.

On the other hand, EXTENDA (Andalusian Agency for Foreign Promotion) joins the collaborating institutions of Flamenco Festival in 2019, within the framework of the Andalucía Flamenca program that reflects the Andalusian regional government’s firm commitment to promoting Andalusian flamenco companies in the international arena, offering the whole world an opportunity to experience this exceptional cultural heritage.

Flamenco Festival USA is presented in collaboration with, New York City Center, Joe’s Pub at the Public Theater, and World Music Institute, in New York; Adrienne Arsht Center, and Fundarte, in Miami; Old Town School of Music, and Instituto Cervantes, in Chicago; and the Embassy of Spain in Washington DC.

The festival has the support of INAEM, Extenda-Junta de Andalucía, New York Tourism Office (Tourspain), Spain Arts & Culture and the Consulate of Spain in New York.