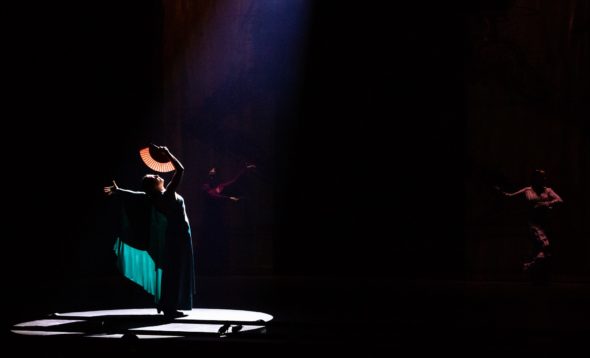 With 26 performances, in 4 different spaces, and the creation as leitmotiv of this edition, Flamenco Festival Londres is the largest flamenco festival organized in a city outside of Spain.

The best Spanish flamenco comes to the London stage with the help of Flamenco Festival in this 16th edition that begins tomorrow, July 2nd and runs for 2 weeks until July 14th, confirming one of the most important platforms for the promotion of flamenco on the international scene, and the largest flamenco festival organized in a city outside Spanish borders by number of proposals and functions.

As the start of this edition of the Flamenco Festival London, the Flamenco Ballet of Sara Baras, the great flamenco ambassador, returns to the Sadler’s Wells Theatre, for the premiere in Reno Unido of the show ‘Sombras’, between July 2nd and 7th. This emblematic space again welcomes the dancer of San Fernando with the assembly that celebrates its 20 years on the stage and has drawn a successful career in theatres around the world.

Sara Baras other great names of flamenco dance will be cited next days in London. Rocío Molina will present her ‘Fall of the sky’ on July 9th, Olga Pericet her ‘The thorn that wanted to be a flower and the flower that allowed to be a dancer’ on July 11th, Patricia Guerrero will represent ‘Cathedral’ on July 14th, Jesús Carmona will make the première of his residence in London on July 13th, and directed by Manuel Liñan, on July 12th and 13th on the stage of Sadler’s Wells will see the Gala Flamenca produced in 2019 by Flamenco Festival, a dialogue between artists like the exponents of the dance Eduardo Guerrero, Mercedes Ruiz and María Moreno, the sounds of the cantaora María Terremoto or the guitarist Santiago Lara. Nanako Aramaki completes the dance offer with her ‘Obliqueffect’ on July 10th at the Rich Mix.

Acclaimed Iraqi-American musician Amir ElSaffar, along with flamenco artists such as cantaora Gema Caballero, bailaora Vanesa Aibar, and percussionist Pablo Martín Jones, will perform the recital ‘Luminescence’ on July 6th at the Lilian Baylis Studio. Also participating are the musicians Lorenzo Bianchi Hoesch and Dena ElSaffar. On July 12th in the same space, the young Kiki Morente, accompanied by the dancer Irene Rueda, presents his first album ‘Albayzín’, for the first time in the United Kingdom, a work with new proposals since the tribute to patriarch Enrique Morente. For his part, on July 13th, flamenco flautist Sergio de Lope presents his new work “Ser de Luz” to the London public.

Outstanding disciple of maestro Manolo Sanlúcar, guitarist David Carmona on his debut in London, within the Flamenco Eñe cycle with the collaboration of the SGAE Foundation, presents on July 12 one of the best flamenco works of recent years: ‘A dream crazy’. Rounding out the Flamenco Eñe cycle of the Sgae Foundation are the performances of Diego Villegas, who on July 6th presented his first album ‘Bajo de Guía’ at the Cervantes Theatre in London; and Antonio Lizana who presents in the same space on July 11th the show ‘Oriente’ offering a live show that is more than a concert through his two published albums.

The Extremadura Flamenco Abierto project arrives at the Cervantes Theatre in London on July 6th, integrated by the dancer Jesús Ortega (Badajoz), the singer Manuel Pajares (Santa Amalia, Badajoz), the guitarist and cantaor Juan Manuel Moreno (Carcaboso, Cáceres), and the percussionist Sergio García (Badajoz). Flamenco Abierto arises from the need to share the flamenco feeling, without additives, without rancid manias, preserving the essence but always opening to the world an art that is very alive.

As in previous editions, the Flamenco Festival shows will be complemented by other experiences such as the ‘Be Bold’ opera house. Be Heard ‘in which the plastic artist of Algeciras Ándrés Mérida will share his creative process with the bailaor, the multi-instrumentalist Sabio Janiak and the London collective of poets The Yoni Verse on July 4th at the Rich Mix in London. It will be in this space when on July 5th Rosario “La Tremendita” and Ceuta La Shica, with Didi Gutman, star in the double program ‘Women at the Edge’.

Under the motto “This is creation. This is flamenco,” the London event reflects the vibrant contemporary scene of this art and the new paths that open for it. With creativity as a driving force and fundamental axis, Flamenco Festival London gives voice to creators of different generations, consolidated artists and new talents, who are advancing this language from very different positions, but with a marked personal stamp.

We are the most important platform for flamenco worldwide