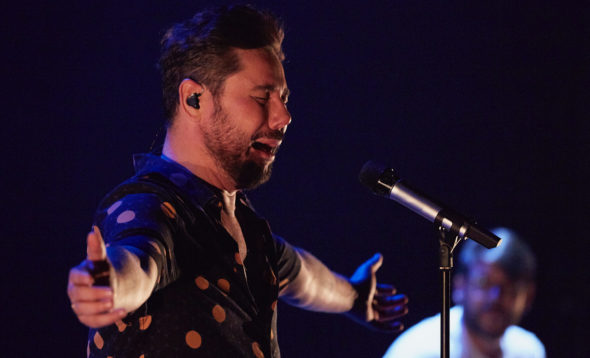 The piano of David Peña Dorantes will be integrated with the saxophone of Tim Ries, saxophonist of the Rolling Stones, in the show ‘Flamenco meets jazz’

Dancer Sara Baras said goodbye to London yesterday after having dazzled a total of 7,500 spectators

With 26 performances, in 4 different spaces, and the creation as leitmotiv of this edition, Flamenco Festival Londres is the largest flamenco festival organized in a city outside of Spain

In this 16th edition, Flamenco Festival London reaches its Ecuador with a public success and faces a week of great dates until next Sunday, July 14, confirming one of the most important platforms for the promotion of flamenco on the international scene, and the festival of flamenco of greater dimension organized in a city outside the Spanish borders by number of proposals and functions.

The Flamenco Ballet of Sara Baras said goodbye yesterday to London after a triumphant week at the Sadler’s Wells Theater in which his show ‘Sombras’ has been enjoyed by a total of 7,500 spectators. The shows of Rosario La Tremendita and La Shica filled the night ‘Women at the edge’ in the Rich Mix, as well as ‘Luminescence’ by Amir El Saffar at the Lilian Baylis Studio, or Diego Villegas and Flamenco Open last Saturday at the Cervantes Theater.

After saying goodbye to Sara Baras, other great flamenco dance names will meet in London in the coming days. The impressive staging of Rocio Molina arrives in Sadler’s Wells with her show ‘Fallen from the sky’ tomorrow, July 9th. Spanish National Award for Dance in 2010, Rocío Molina has coined her own artistic language based on a reinvented traditional flamenco style which respects its essence, but embraces the avant-garde. Radically free, she combines in her works: technical virtuosity, contemporary research and conceptual risk. This piece is a descent, the journey of a woman, guided by her dance, which is intuition and substance, through lights and shadows, and with her we fall into the silence, the music and the noise within unknown territories. She dances and establishes a different relation with the earth and so you have the feeling that her dance is born from her womb and the soil she kicks, and thus her dance becomes the celebration of being a woman.

The innovation and strength without limits of the dancer Olga Pericet will unfold on Thursday July 11 at Sadler’s Wells with the show ‘The thorn that wanted to be a flower or the flower that dreamed of being a dancer’ that is represented for the first time in the United Kingdom thanks to Flamenco Festival. Pericet once again sets in motion his scenic laboratory to build a poetic show through performing and dancing. With this show, Olga Pericet embarks upon a personal journey through dance based on memories, injuries and embraces from the past. Time caresses her as if it were a dream, blending the real with the surreal in a single space and time: her interior.

Other great names of flamenco dance will be cited next days in London: Patricia Guerrero will introduce ‘Cathedral’ on July 14th, Jesús Carmona will make the première of his residence in London on July 13th; and directed by Manuel Liñan, on July 12th and 13th on the stage of Sadler’s Wells, the London public will see the Gala Flamenca produced in 2019 by Flamenco Festival, a dialogue between artists like the exponents of the dance Eduardo Guerrero, Mercedes Ruiz and María Moreno, the sounds of the cantaora María Terremoto or the guitarist Santiago Lara. Nanako Aramaki completes the dance offer with her ‘Obliqueffect’ on July 10th in the Rich Mix.

In the musical section London Flamenco Festival offers on Wednesday, July 10 at the Sadler’s Wells Theater the UK premiere of the show ‘Flamenco meets jazz’. This program brings together three exceptional artists who have been prominent in breaking barriers in music, using elements of various genres in their innovative works. Dorantes, known as ‘the jewel of the flamenco piano,” gracefully combines classical, jazz, Celtic or Brazilian into his melodies, resulting in a rare avant-garde style that has earned him countless international awards and accolades. An extraordinary artist, he was born in Lebrija to a legendary flamenco family and has collaborated with many of flamenco’s leading figures, including Carmen Linares, Marina Heredia and Rocío Molina. Double bass phenomenon and multi- instrumentalist Adam Ben Ezra has brought the double bass out of the shadows to the dominant front-presence it deserves and pioneered a new style of playing. In his engaging performances, he incorporates jazz, Latin and Mediterranean music. Tim Ries, a master of tenor and soprano saxophones, has performed with a who’s who of jazz, world music, rock, and pop icons, including the Rolling Stones. The ensemble will have a very special guest: the dancer Jesús Carmona.

On July 12th in the Lilian Baylis Studio, part of Flamenco Eñe cycle of the Sgae Foundation, the young Kiki Morente, accompanied by the dancer Irene Rueda, presents his first album ‘Albayzín’, for the first time in the United Kingdom, a work with new proposals since the tribute to patriarch Enrique Morente. On the other hand on July 13th, flamenco flautist Sergio de Lope presents his new work “Ser de Luz” to the London public. Outstanding disciple of maestro Manolo Sanlúcar, guitarist David Carmona on his debut in London, within the Flamenco Eñe cycle with the collaboration of the SGAE Foundation, presents on July 12 one of the best flamenco works of recent years: ‘A dream crazy’. Rounding out the Flamenco Eñe cycle is the performance of Antonio Lizana who presents in the Cervantes Theatre on July 11th the show ‘Oriente’ offering a live show that is more than a concert through his two published albums.

130
Artists
67
Theatres
+1.6 M
Spectators
ABC
The month of February has become the 'jondo' month in New York
Dance Tabs
Rarely have I witnessed a prolonged standing ovation midway through a show but it happened here