HomeliveThe British critics and more than 19,000 spectators support the largest edition of FLAMENCO FESTIVAL in London 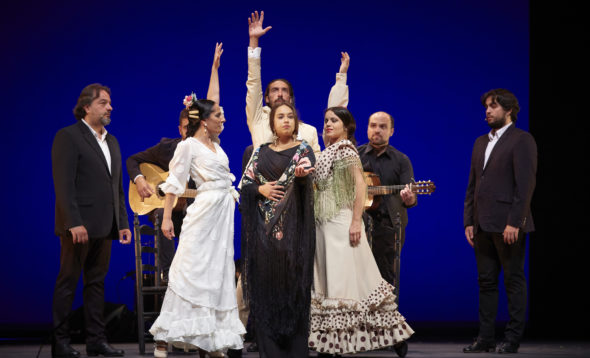 The British critics and more than 19,000 spectators support the largest edition of FLAMENCO FESTIVAL in London

The shows by Sara Baras or the Gala Flamenca, produced by Flamenco Festival, managed to sell out at the Sadler’s Wells Theater. It also highlights the reception of flamenco nights at the Lilian Baylis Studio, at the Cervantes Theater in London and at the Rich Mix.

With the collaboration of Extenda, 15 companies related to the world of Flamenco have reached the British market.

With the creation as leitmotiv of this edition, the 16th Flamenco Festival London has been the largest flamenco festival organized in a city outside Spain

More than 19,000 spectators have enjoyed the artistic and cultural offer of the 16th Flamenco Festival in London between July 2 and 14, the largest flamenco festival organized in a city outside Spain’s borders by number of proposals and functions ; “A festival that is not easy to see even in Spain, and one of the most substantial, attractive and at the same time risky initiatives to spread this art internationally” (Julio Bravo, ABC).

After 16 years without missing his annual appointment with the London public, Flamenco Festival London has materialized its proposal in the month of July, successfully moving its traditional dates from February to summer.

The unanimous applause of the recently closed edition of Flamenco Festival in London is based on teamwork and complicity with each of the programmed artists, who have given themselves completely. It also relies on the host theaters and its technical staff, such as Sadler’s Wells, which opens to the festival as the main venue, as well as new venues incorporated this year such as the Rich Mix or the Cervantes Theater in London. And nothing would be possible without the involvement of collaborating entities that bet on the Festival and that has made it possible for the event to become one of the most significant stable events of Spanish culture in London.

The Festival has been confirmed as the main platform for flamenco, Intangible Heritage of Humanity, which has toured the stages receiving the applause of the critics and raising the audience in passionate acclamations evening after evening, both in the most traditional proposals and in the most avant-garde.

With the creation as leitmotif of this edition, there have been 18 shows, with a total of 26 performances, in 4 different spaces of the city, including artistic residencies and performance shows.

The Sadler’s Wells Theater, great temple of dance in London, has hosted the shows of this discipline that have starred first names in flamenco dancing. It was the Flamenco Ballet of Sara Baras, the great flamenco ambassador, who inaugurated this edition of Flamenco Festival that returned to the emblematic space for the premiere in the UK of the show ‘Sombras’ achieving nights of sold-out tickets and glowing praises from the London critics . (“The bailaora exudes a powerful authority in this opening show of the festival that ranges from poetic interludes to movements of great technical precision” – Lyndsey Windship, The Guardian); (“A fully convincing display of first class dance and star power, in which almost all the supporting elements are also exceptional” – Donald Hutera, The Times).

Along with Sara Baras, other great names of flamenco dance have gathered in London. Rocío Molina presented her ‘Caída del cielo’, (“The most wild, radical, punk and glorious flamenco, a magnificent bailaora whose range captures the fierce intensity of traditional styles, surreal fantasy and unpredictable humor” – Zoë Anderson, The Independent); Olga Pericet premiered in UK ‘The thorn that wanted to be a flower and the flower that wanted to be a dancer’ and Patricia Guerrero showed her ‘Cathedral’ with the public standing up (“Pericet and Guerrero raise a storm in London taking the transformation of flamenco to another level, moving away from its traditional roots to become a vivid and relevant theatrical force “- Lyndsey Windship, The Guardian).

Jesús Carmona made the première of his residency in London with the musician Sabio Janiak, the actor and choreographer Ferrán Carvajal, the dancers of contemporary dance Yasmin Mahmoud and Chisato Ohno. Promoted by Flamenco Festival in each of its editions, these residences contribute to the creation and expansion of flamenco horizons. (“These brief residences can become precious instruments when it comes to involving viewers in creative processes and educating new generations in respect for art and its searches” – Rosalía Gómez, Grupo Joly).

With all the tickets sold and directed by Manuel Liñan, on the stage of Sadler’s Wells could be seen the Flamenco Gala produced in 2019 by Flamenco Festival, a dialogue between artists such as the exponents of the dance Eduardo Guerrero, Mercedes Ruiz and María Moreno, the sounds of the cantaora María Terremoto or the guitarist Santiago Lara. (“As the artistic director of the gala, Liñán, an innovative dancer in his own right, brought together four great talents, three bailaores and one cantaora, backed by an outstanding group of musicians, for an impressive combination of six episodes led by the dance” – Graham Watts, Dancetabs).

In the musical section Miguel Poveda returned after five years to Sadler’s Wells to offer one of his unforgettable flamenco recitals (“The music of Poveda runs free of prejudice and with respect and talent as standard bearers” – Concep Díaz Pérez, La Tundra) . The Lebrija-born pianist Dorantes presented the show ‘Flamenco meets jazz’ with the Rollin Stones saxophonist Tim Ries, the multi-instrumentalist Adam Ben Ezra, and the dancer Jesús Carmona as a guest artist, (“a true musical and sensory journey between cultures that they found the most moving and impressive way to live and shine “- Ana Rivadulla Crespo and Adelaida Monguillot, La Tundra).

In smaller venues, the musical section of Flamenco Festival had milestones in 2019 as the presence of the acclaimed Iraqi-American musician Amir ElSaffar, along with flamenco artists such as cantaora Gema Caballero, bailaora Vanesa Aibar, percussionist Pablo Martín Jones, and the musicians Lorenzo Bianchi Hoesch and Dena ElSaffar, in the recital ‘Luminescence’ that hosted the Lilian Baylis Studio. In the same space, within the Flamenco Eñe cycle with the collaboration of the SGAE Foundation, the young Kiki Morente, accompanied by the dancer Irene Rueda, presented his first album ‘Albayzín’, for the first time in the United Kingdom, a work with new proposals from the tribute to patriarch Enrique Morente. For his part, flamenco flautist Sergio de Lope presented his new work “Ser de Luz” to the London public.

The Flamenco Eñe cycle of the SGAE Foundation was completed by the guitarist David Carmona on his debut in London, an outstanding disciple of the maestro Manolo Sanlúcar, who presented one of the best flamenco works of recent years: ‘A dream of madness’, (” an example of technique and wisdom despite his youth “, Rosalía Gómez, Grupo Joly); and Antonio Lizana at the Teatro Cervantes who presented “with his saxophone and his smile, calmly and with pleasure, the themes of his album Oriente, to involve with his flamenco jazz the small audience that was delivered without ambush until sharing an authentic party musical “- Rosalía Gómez, Grupo Joly).

The musician Diego Villegas, for the first time in London, presented his first album ‘Bajo de Guía’ at the Teatro Cervantes in London; and in the same space the Extremaduran Open Flamenco project was presented, integrated by the bailaor Jesús Ortega (Badajoz), the singer Manuel Pajares (Santa Amalia, Badajoz), the guitarist and cantaor Juan Manuel Moreno (Carcaboso, Cáceres), and the percussionist Sergio García (Badajoz). (“They came to conquer Chicago and amazed with their pure flamenco bet, without additives or rancid manias, but with winks that got the public into the soul” – Carlos Fresneda, El Mundo).

As in previous editions, the Flamenco Festival shows have been complemented by other artistic experiences such as those programmed in the Rich Mix, where artists from all types of disciplines have been mixed with a young and multicultural audience eager to enjoy the most avant-garde proposals. This is the case of the ‘Be Bold’ perforation residence. Be Heard ‘in which the plastic artist of Algeciras Ándrés Mérida shared his creative process with the dancer Jesús Carmona, the multi-instrumentalist Sabio Janiak and the London collective of poets The YoniVerse at the Rich Mix in London. It was in this space where Rosario Guerrero “La Tremendita” and La Shica from Ceuta, with Didi Gutman, starred in the double program ‘Women at the Edge’, and where Nanako Aramaki completed the performative offer with her ‘ Obliqueffect ‘.

Once again Flamenco Festival London has been the reflection of the vibrant contemporary scene of this art and the new paths that open for it, it has been able to give voice to creators of different generations, consolidated artists and new talents, who are advancing this language from very different positions, but with a marked personal style.

This edition has been the most important in the history of the festival in London, with a wide increase in programming, with 53% more shows compared to the 2018 edition, going from 17 to 26 performances. A total of 133 Spanish participants from 18 companies will present their work in London to an expected audience of 24,000.

One more year, the program devotes a special space to emerging artists, with 11 proposals for artists presenting their work for the first time in the capital of the United Kingdom, representing 61% of festival.

In an edition dedicated to creativity in flamenco, Flamenco Festival prioritizes the processes beyond the results, expanding the program of artistic residences started 7 years ago; a space for experimentation and meeting between flamenco artists and international artists from other disciplines.

With a trajectory of three decades in which the 277,000 spectators and the 250 representations have been surpassed, in charge of the most important figures of the current flamenco, Flamenco Festival Londres is a consolidated event in the British capital, a space for the exploration of the paths that flamenco begins to build in search of new horizons.

With one million six hundred thousand spectators around the world and over seven hundred performances, Flamenco Festival is today the most important international platform for flamenco. With main venues in New York and London, and after 19 years of activity, Flamenco Festival has a presence in 101 cities around the world, has presented 129 companies and 1,225 shows. Only in 2018 he went through London, Manchester, New York, Miami, Boston, Atlanta, Montreal, Los Angeles, San Francisco, Irvine or Portland.

Flamenco Festival Londres is presented in collaboration with Sadler’s Wells, Rich Mix, and Cervantes Theater, and has the support of INAEM, the Junta de Andalucía through Extenda – Andalusian Agency for Foreign Promotion, and the Andalusian Agency for Cultural Institutions through the Andalusian Institute of Flamenco, the SGAE Foundation, AC / E Spanish Cultural Action, the London Tourism Office, the Cervantes Institute in London, Spain Arts & Culture, the Embassy of Spain in London, the Junta de Extremadura (Center of the scenic arts and music) and the Diputación de Sevilla (Tourism of the Province).

Thanks to the participation of Extenda in the 16th edition of Flamenco Festival Londres, from its program for the internationalization of Andalusian cultural companies, 15 companies related to the world of Flamenco have had the opportunity to reach the British market.

130
Artists
59
Theatres
1.6 M
Spectators
ABC
The month of February has become the 'jondo' month in New York
The New York Times
One of the year's biggest dance events in New York City