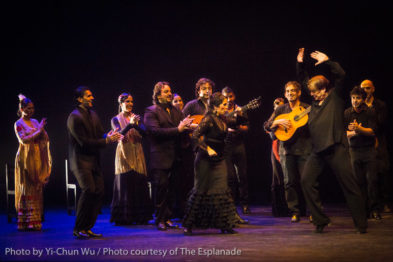 Directed by Ángel Rojas, this gala brings together four of the world´s most celebrated flamenco dancers: The master of flamenco Antonio Canales, one of Spain´s most powerful flamenco dancers of all times; the unforgettable choreographer of Nuevo Ballet Español Carlos Rodríguez; Karime Amaya, grandniece of Carmen Amaya and a sensationally beautiful and riveting performer, and the Young starlet Jesús Carmona, to round off and evening of flamenco to showcase the best of modern flamenco.

Antonio Canales: Antonio Canales was born in 1961 in the Triana neighborhood of Seville. He began his formal studies at the National Ballet of Spain, where he was able to work as a soloist, deciding later to make the move to Paris. There, Canales joined the company of Maguy Marin, which opened the doors for him to the world of dance on an international level. He headlined in some fifty performances, appearing on show bills with important figures such as R. Nureyev or Maya Plisetskaya. At this point, Canales had become an international dance celebrity. In 1988, he received the Navisela award in Italy for best dancer. In 1990, Canales was also joint recipient of the Best International Dancer prize in Mexico with Julio Bocca. In 1992 he created his own company with two choreographies: A ti, Carmen Amaya and Siempre flamenco. His next show, Torero, premiered in Montreal, Canada, in 1993. Just one year later, the show opened in Madrid, where it was so successful that to date, the show has been performed on more than 1,000 occasions. Antonio Canales received the National Award for Dance in 1995. One year later, the show Gitano premiered in the Teatro Central of Seville. In 1998, he teamed with the Catalan stage designer Lluis Pasqual to present Bengues in the Madrid Autumn Festival. As a result of a commission from the National Ballet of Spain, he created Grito, which premiered in New York’s city centre. In 1999 he opened the school that bore his name, Fuerza Latina in Avila; he also received the Max Award for best dance performer, he filmed the movie Vengo and he received the Medal of Andalusia, his homeland. In 2000, the Theatre Festival of Merida invited him to premiere Prometeo. Over 2001, he toured Latin American and Spain with Bailaor. The following year he celebrated the tenth anniversary of his company with the reopening of Torero. In 2003 he offered a show in Seville that paid tribute to Fernando Villalon called Ojos Verdes, also receiving another Max Theatre Award for best dance performer. Carmen, Carmela (2004) showed Canales’ vision of Carmen de P. Merimee. He also took part in the Seville Biennial Flamenco Festival along with flamenco giants such as Paco de Lucia, Tomatito and Eva Yerbabuena. He also participated in the Festival of Classical Theatre in Merida in 2005 with Sangre de Edipo. In 2006, he presented Musical Flamenco Los Grandes, touring with that show until 2007. In Caracas, Venezuela he presented in 2009 his personal version of The House of Bernarda Alba, the timeless play written by Federico Garcia Lorca. In the last few years, Antonio Canales has worked in Guanajuato, Mexico participating in events related to the bicentenary of Mexico’s independence. He has also taught lessons at the Theatre of Madrid, collaborated with the Cervantes institute and continued offering his shows in different European and American capital cities.

Carlos Rodríguez Carlos Rodríguez was born in Madrid in 1975, and he was only 13 when he reached the Spanish National Ballet’s final auditions. His professional dancing career began with the Ballet Teatro Español under the direction of Rafael Aguilar. As a youth he also performed with Ballet Teatro Español under the direction of Luisillo, with Ballet Español de Madrid under the direction of José Granero, and with the Zambra Ballet. In Expo ‘92 in Seville, he worked on La Petenera, directed by Emilio Hernández, and he was selected by the Teatro de la Zarzuela to take part in the play Chorizos y polacos with choreography by Alberto Lorca. Rodríguez was a guest soloist with the Real Conservatorio Profesional de Danza in 1992. At the OTI festivals in 1992 and 1993, he was choreographed by Goyo Montero, and he subsequently joined José Antonio and the Spanish Ballet as soloist dancer. Then in 1994, he won the award for the most outstanding dancer at the Certámen Nacional de Coreografía de Danza Española together with Rojas, and he worked for the Teatro de la Zarzuela, under the
direction of Emilio Sagi. Rodríguez has admitted that although he has performed and knows pure flamenco well, it does not appeal to him, and he understands that the flamenco of his parents does not speak to most people his age. Partly born of his drive to innovate within flamenco, in 1995 he co-created the Nuevo Ballet Español with Rojas, and their company’s performances have been responsible for attracting a whole new audience to flamenco. In addition to touring with the Nuevo Ballet Español, Rodríguez has choreographed and danced for the José Antonio Spanish Ballet, and he teaches privately and has designed some of the costumes used in Furia. At this moment Rojas and Rodriguez have premiered their latest work El Amor Brujo (Love the Magician), from the compositor Manuel Falla with the participation of well-known dancing stars as Antonio Canales, Lola Greco and Chevi Muraday, among others.

Karime Amaya Karime Amaya was born in 1985, within a family deeply rooted in the flamenco tradition. She is Carmen Amaya’s grandniece. Daughter of the bailaora Mercedes Amaya, “La Winy” and guitarist Santiago Aguilar, at only nine years old, she made her debut in her parents troupe. She has performed alongside Farruquito, María Pages, Israel and Pastora Galvan, Antonio Canales, Manuela Carrasco, Rafael and Adela Campallo, Torombo, Rafael del Carmen, among many others, in four editions of the prestigious Festival Flamenco lnternacional Albuquerque in New Mexico. In 2003, she performed at the Arts Presenters’ 46th annual members conference in New York, and in 2004 she performed a successful six month season in Japan at Tokyo’s most prestigious tablao (flamenco venue) “EI Flamenco”.The following year, Karime traveled to Spain to appear as a guest artist in Antonio Canales’ show Bailaor. ln addition, in Ecuador, she participated with Los Losada in the 2005 Festival Ouito Flamenco. Later, in 2006, she went on a tour with the bailaor Juan de Juan as a guest artist on the show Frente a Frente touring more than thirty cities of the Iberian Peninsula. That same year she is invited to the Festival Arte Flamenco in Mont-de-Marsan, France, where she shares the stage with Gerardo Nunez and performs alongside Mario Maya’s troupe, with Antonio “EI Pipa” and the Farruco family, among others. In September 2007 she goes on an extensive tour throughout Japan’s major cities with the Mexican National Dance Company. In 2008 she participated in 10th Flamenco Art Festival of Monterrey, Mexico. In 2011, she premieres the show “Amaya Linaje” along with her family. The show becomes an authentic claim of artistic values found in the DNA of one of the great family sagas the flamenco has given. In February of 2012, she successfully performed her show “Desde Ia Orilla” at the Jerez festival. This same year, Joaquín Cortés, invites her to be part of his new show “Dicen de mi”. They premiered on December 14 in Madrid, with sold out performances until January 6, 2013. Also in 2012, Juan Fernández Montoya “Farruquito” invites her to dance in “Abolengo” – a new show where the Farrucos and the Amaya meet on the setting that made them famous, the flamenco dance. The show premieres in the fall, at the Teatro Nacional de San José (Costa Rica) and the world tour starts in January 2013.

Jesús Carmona Jesus Carmona, born in Barcelona in 1985, began his training at the age of seven. He enriches his studies with different classes and teachers including classical dance with Barbara Kasprovich, Rodolfo Castellanos, Ion Garnica, Carmen Huguet and Ion Beitia; Bolera school with Cesar Casares, Pilar Cambra and Montse
Alba Rosa Lloret; contemporary dance with Elisabeth Lang, Gilberto Ruiz-Arguelles and Avelina Castells; flamenco with Sonia Poveda, Nacho Blanco, Antonio Canales, Maria Magdalena, Domingo Ortega, Eva Yerbabuena, Belen Fernandez, Angel Rojas, Juana Amaya, Rafaela Carrasco, and Manuela Carrasco. He was awarded third prize for choreography in the Nou Barris-2001 competition and a mention in Youth Values in the National Contest of Flamenco Dance, Hospitalet – Barcelona 2002. Carmona made his professional debut at the Teatro Zorrilla with the Orchestra of the Teatro Liceu in Barcelona at the early age of 16. His career to date has involved working with companies such as Nuevo Ballet Español, Carmen Cortes, El Guito, Esther Carrasco, Antonio Canales, Rafael Amargo, La Truco, and Monica Fernandez. In 2006, he presented his debut show The Silence of the Moon. That same year all his efforts were recognised when he was elected to become a member of the National Ballet of Spain and a year later became first dancer. During these years he participated in works such as: Albarada del Gracioso (Maestro Granero), Golpes de la Vida (Jose Antonio y Rafael Campallo), Cambalache (Antonio Canales), Dualia (Rojas y Rodriguez) and Ritmos (Alberto Lorca). During 2010, he participated as guest artist for the tour of Rojas and Rodriguez in Asia and with the National Ballet of Spain in Heart of Green Stone. His concern and his desire to show his personal side and pave his way into the arts more broadly led him to leave the National Ballet of Spain and the same year embark on a new adventure, Black and White Crib.