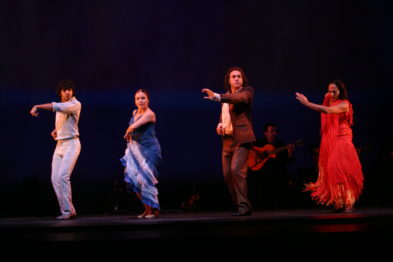 Four Elements, Four Artists, Four Styles which makes the world of Flamenco. Four different elements unified by the music of Gerardo Núñez. From the four elements, water, fire, hearth and air, we travel to the different emotions and feelings of flamenco. From the passionate fire of Carmen Cortés, to the wavy dance of Rocío Molina,… the earthy dance of Alejandro Granados, the ethereal dance of Carlos Rodriguez.

JACQULYN BUGLISI
In her four decade long career as a choreographer, artistic director, master teacher and advocate, Jacqulyn Buglisi has made an indelible impact on the field of dance. Having performed throughout the world with the Martha Graham Dance Company as a principal dancer, and with Buglisi Dance Theatre, she is known for imagistic dances that use heroic archetypes as a primary source. Her works, archived at the NY Public Library, have been commissioned and presented by The Joyce Theater, Alvin Ailey American Dance Theater, MGDC, Jacob’s Pillow, Kennedy Center, North Carolina Dance Theatre, The Juilliard School, Richmond Ballet, UC, Santa Barbara, SUNY Purchase, Vail, Chautauqua, NY Flamenco, Melbourne and Prague International Festivals, among others. Buglisi is Chair of the Graham-based Modern Department at The Ailey School and a member of the faculty since 1988. As a master teacher of the Graham technique for 45 years, she has served on the faculties of The Juilliard School, The Martha Graham School, the famed Performing Arts H.S. (alumna), and leads educational residencies throughout the U.S. Her honors include Council Chair on Dance/USA’s Board of Trustees, National Endowment for the Arts Choreographer Fellowships, Italian International Lifetime Achievement Award, Kaatsbaan International Playing Field Award, Fiorello LaGuardia Award for Excellence in Dance, American Dance Guild Award, Altria’s Women Choreographer Initiative Award, and proclamations from the Governor Cuomo and Mayor de Blasio for uniting the community through the annual Table of Silence Project 9/11 performance ritual for peace with 150+ dancers at Lincoln Center.

CARMEN CORTÉS
Born in Barcelona of Andalusian parents. Her first steps in dancing came through Flamenco. She acquired knowledge in Classic Dance at the Escuela del Ballet Nacional (National Ballet School). She graduated as ‘Titulada Superior de Danza’ (Superior degree) in 1994. Carmen Cortés, is currently one of the most prestigious artists in the Spanish dance scene, especially in reference to XXI century flamenco dance. She defines herself primarily as a flamenco dancer, but she participates in other forms of creation within dance and theatre through a continuous pursuit of reinvention and a meeting of flamenco and other manners of understanding dance. Her style of dance is ferociously independent and always in search of innovation. Her dancing is elegant and sober, strong and fragile, delicately fierce and very personal with the utmost dedication and complete surrender. With 27 productions under her belt, she has collaborated with some of the most important directors in Spain: Gerardo Vera (La Celestina and Salome), Nuria Espert (Yerma), Francisco Suarez (Falla’s El amor brujo), Fernando Bernués (Lorca’s Women), and has danced the works of writers such as Lorca, José Bergamín, Vicente Alexandre, Rafael Alberti, Oscar Wilde and Miguel de Cervantes (La Gitanilla, the little gipsy).

ALEJANDRO GRANADOS
She is a soloist with the Ballet Clásico de Zaragoza and the Ballet Español de Madrid. She participated for three seasons in the Salzburg Festival, while also working with the Ballet Nacional de España. In 1990 he formed a couple with Lola Greco in the show Los flamencos somos así, by T. R. Pantoja. A year later he performs La memoria del cobre, by Francisco Suárez and Carmen Cortés. In 1995 he is a soloist dancer in several festivals in the United States, along with the Farruco family. He worked in plays such as Yerma, under the direction of Nuria Espert (1996), A nuestro aire (1998), etc. In 2000 he participated in the show El baile flamenco de las nuevas generaciones, presented by Cristina Hoyos at the Teatro de la Maestranza in Seville. Also that same year he performed in the XI Bienal de Flamenco de Sevilla, playing one of the leading roles in the play Medea, directed by Pilar Távora. In 2001 he presents, together with the dancers Andrés Marín and Rafael Campillo, the show Trilogía, in the cycle Flamenco viene del Sur. In the IV Festival de Jerez 2002, he performs the show Sabor añejo at the Teatro Villamaría, and that same year, he plays the character of Zeus in Orestes, in the XII Bienal de Flamenco de Lisboa. He travels to Tokyo as a guest dancer to represent the character of Diego Rivera, in the Centennial Tribute to Frida Khalo, performed at the National Theater of Tokyo. During the months of June to December 2003, he toured the USA where he was a guest artist and choreographer at the Joyce Theatre in New York for the Maria Benitez Company. In 2004, he was invited to participate in the show Un, dos, tres, faa directed by Mario Maya at the Festival de Jerez. He currently directs his own company with which he tours theaters and flamenco venues, combining his dancing with his work as a Flamenco teacher.

CARLOS RODRÍGUEZ
Dancer and choreographer of classical Spanish and flamenco, Carlos Rodriguez directs together with Angel Rojas the company Nuevo Ballet Español (NBE). They founded it in 1995, and since then it has served them both to make a flamenco far from the pure and traditional, which they mix with other more contemporary disciplines. Carlos Rodriguez began with Rafael Aguilar’s Ballet Teatro Español, after being a finalist at the age of thirteen in the auditions of the National Ballet of Spain. The Ballet Teatro Español de Luisillo, the Ballet Español de Madrid and the Ballet Zambra, other companies in which the young creator danced. He was a soloist in the company of José Antonio and the Ballets Españoles and in 1994 he won, together with Ángel Rojas, the prize for the best outstanding dancer in the National Choreography Contest. His first choreographic experience was with Rojas in La zapatera prodigiosa, created for the Teatro de la Danza de Madrid. This was followed by Infierno S.L. (1995), Canela y fuego (1996), Sangre flamenca (1997), Flamenco Directo (1998), Furia (2000), Alma (2006), a work that commemorates the ten years of the group he directs, Sangre (2008) and Cambio de tercio (2009), among others. Romeo y Julieta, premiered in 2003, is the only solo work that Carlos Rodríguez has created within the NBE. In 2008 they changed the name of their company to ‘Rojas y Rodríguez Compañía’ and premiered the show Baile de máscaras, commissioned by the Community of Madrid to commemorate the Bicentenary of the War of Independence, with original music by José Nieto and Daniel Jurado. Carlos Rodríguez has received the Villa de Madrid Pilar López Award for best dance performer (2005).

ROCÍO MOLINA
Rocío Molina, a restless dancer, was born in Malaga in 1984. She started to dance at the early age of three years old. At seven, she was outlining her first choreographies. At 17, she graduated with honors at the Royal Dance Conservatory in Madrid and became part of the cast of professionals companies with international tours. At 22, she premiered Entre paredes (Among the Walls), her first work, which was followed by many more self-creations, all of them with a thing in common, a curious and transgressor look at a flamenco style escaping from the well-trodden paths: El Eterno Retorno (The Eternal Return) (2006) Turquesa como el limón (Turquoise as a Lemon) (2006), Almario (2007), Por el decir de la gente (As People Say) (2007), Oro viejo (Old Gold) (2008), Cuando las piedras vuelen (When Stones Fly) (2009), Vinática (2010), Danzaora y vinática (2011), Afectos (Affections) (2012) and Bosque Ardora (Ardora’s Forest) (2014), Caída del Cielo (Fallen from heaven) (2016) and Grito Pelao (2018). At 26, the Spanish Ministry of Culture awarded her the National Award for Dance for “her contribution to the renewal of flamenco and for her versatility and strength as a performer capable of handling the most diverse registers with freedom and courage.” At 28, after her outstandingly successful performance of Oro Viejo (Old Gold), Mikhail Baryshnikov kneeled before her at the door of her dressing room at New York City Center. She’s been associated with the Chaillot National Theater in Paris since 2014 where she premiered in November 2016, Caída del Cielo. She premiere in the Festival d’Avignon in July 2018 Grito Pelao she create with the singer Sílvia Pérez Cruz and Carlos Marquerie.

GERARDO NÚÑEZ
Núñez was born in Jerez de la Frontera (province of Cádiz) in 1961. His first teacher was Rafael del Águila. At the age of fourteen he accompanied important cantaores and bailaores like Tío Gregorio el Borrico, Terremoto de Jerez, La Paquera and Mario Maya, among others. He has recorded as a concert guitarist and accompanying the voices of Turronero, Pansequito, Indio Gitano. In his triple roles of composer, concert guitarist and accompanist, he has performed in diverse theater shows, the most notable being Mario Maya’s ¡Ay Jondo! and Lorca’s Yerma. He has also performed at numerous music festivals around the world. Afterwards, as a solo artist, Gerardo Nuñez has received excellent reviews, and he is considered one of the best prepared guitarists. He has also performed on several flamenco stages, gatherings and festivals, both at a national level and abroad: Paris, New York, Cologne, Havana, Munich. He has also been part of a guitar quartet, with which he has travelled all over the world, and has played alongside guitarists of international renown like Erico Raba, Alex de Grassi and Briam Gare. Additionally he has collaborated with bassist Eberhard Weber and accordionist Richard Galliano.