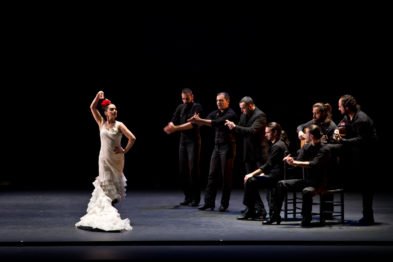 This gala is a tribute to the vitality of the flamenco arts under the point of view of three of flamenco leading ladies. United by their love of flamenco, the performance combines passion, fire, lighting-quick footwork and expressive dance.

Carmen Cortés
Carmen Cortés, the electrifying Gypsy dancer celebrated for her performances of flamenco puro, is renowned throughout the world for her sensuous and passionate style. In addition to training in flamenco, she acquired a grounding in classical dance at the School of the National Ballet of Spain. After performing at Los Canasteros tablao, she became the lead dancer of Mario Maya’s company. Over the years, many of Spain’s most popular dancers, including Joaquín Cortés and Antonio Canales, have performed in her company. She has been noted for her productions of La Puerta del Silencio and Celestina, as well as Salome, the first flamenco version of the Oscar Wilde work. As a soloist and with her company she has participated in the most important European dance festivals. She was the first bailaora to choreograph a granaina, a flamenco palo (style) with a free rhythm.
Her shows includes the importance of the poets in her creations, in special Federico García Lorca in “Women of Lorca”; “To Federico”; “Yerma”… with this show she obtained the award as “Best dancer of the performing arts” in 1998. Her last show “Piezas Unicas” is a recompilation of her five most famous choreographies, specially her soleá.
Recognized by critics as “One of the best dancers of our time” (El Pais), every year, Cortés offered one of the most prestigious courses with her husband Gerardo Núñez.
Carmen Cortés is one of the most prolific dancers of flamenco with over 22 shows which have toured internationally since the creation of his company in 1988 with the show “Flamenco-flamenco”.

Rafaela Carrasco
Rafaela Carrasco’s approach to flamenco dance can be summed up by the title of her 2004 piece Fuera de los límites (Beyond the Limits), created with dancer Belén Maya. Carrasco is a revolutionary creator of cutting edge flamenco choreography.
Carrasco began dancing sevillanas when she was six years old and soon began studying classical Spanish dance at renowned Maltilde Coral academy. After graduating, she joined the Mario Maya flamenco dance company. At 23 she trained as a soloist in Madrid and performed as a lead dancer in performances by various choreographers. In 2002 Carrasco formed her own company, and that same year she won prizes for Best Choreography, Best Composition, and Outstanding Dancer at Madrid’s Dance and Flamenco Choreography Competition. The Rafaela Carrasco Company has mounted six productions. Her first full-length work, La Musica del Cuerpo (The Music of the Body), had its debut at the 2003 Jerez Festival to great renown. The Washington Post deemed her work Una Mirada al Flamenco (A Look at Flamenco) “A bravura display…coherent and true to its roots.” In 2007 she premiered Del amor y otras cosas and next year “ConCierto Gusto” at the Jerez Flamenco Festival, and Vamos al Tiroteo, her next show, won both the Giraldillo and the Press Award for best choreography at the Biennal of Seville. “150 grs. de pensamientos” was premiered at the Flamenco Biennal of Seville 2010. Her last premiere was De un momento a otro at the Teatro de la Abadía de Madrid. In 2011 she has received the Fine Arts Award under the category of Dance of Madrid, Spain.

Olga Pericet
Born in Córdoba in 1975, Olga Pericet attained her degree in Spanish dance in her hometown and studied with maestros such as Matilde Coral, Manolo Marín and José Granero. She was a soloist and guest artist in companies like those of Rafael Amargo, Rafaela Carrasco, New Spanish Ballet, Arrieritos, Teresa Nieto and Miguel Ángel Berna. In 2004 she made her debut as a choreographer and soloist with the show Bolero, carta de amor y desamor and a year later, along with Manuel Liñan, created Camara Negra. That same year she created the montage, Chanta la Mui, co-directed with Daniel Doña and Marco Flores. In 2007 she participated in the prestigious Flamenco Biennial in Seville, together with figures such as Isabel Bayón and Joaquín Grilo. In November that year she toured throughout Australia and China, sharing the stage with Merche Esmeralda and Belén Maya, among others. In 2008 she took part in the Dance Gala of the Expo in Zaragoza with Lola Greco and Nacho Duato, among others.
Other works as a choreographer include: Complot, En sus 13 (Dig One’s Heels In) and Bailes alegres para personas tristes (Happy Dances for Sad People), created with Belén Maya and premiered at the Festival of Jerez in 2010. For this, Pericet received the award for artist revelation. Other awards include: first prize for choreography and music at the Spanish Dance and Flamenco Contest of Madrid (2004), the Villa de Madrid award for best dance performer (2006), the National Flamenco award Pilar Lopez, and the Max 2009 award. Her last show “Rosa, Metal, Ceniza” has been premiered at Flamenco Festival 2012 internationally.