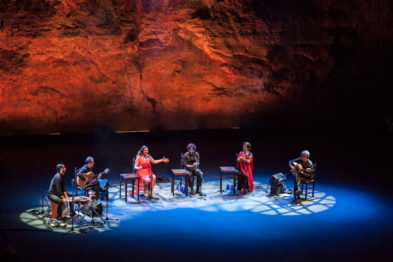 CARMEN LINARES is one of the living legends in flamenco singing. A master of the “jondo” style of singing, Linares has set her sound to the classical-oriented accompaniment of symphonic and chamber orchestras for nearly two decades. She was the first flamenco singer to perform with the New York Philharmonic Orchestra — but she has been equally forceful performing to the classic flamenco accompaniment of a guitar. While The New York Times praised her for her “extraordinary and expressive power,” El Mundo, in Spain, claimed “she possesses three invaluable virtues: power of communication, purity without purism, and all-around competence.” Her voice has the gritty quality of a blues singer. It’s a lived-in voice, textured by an age old wisdom, passed on generation to generation, and unteachable elegance. Carmen Linares is the grand dame of cante.

ARCÁNGEL is one of the leading lights of a new generation of vocalists who is making waves internationally with his creative renditions of the classical cante jondo repertoire. This singer from Huelva (1977) creates his own world with a subtly expressive voice that is classified as unusual within flamenco. It is unwavering with an unyielding tone that is so strong and disarming, nasal and Arabic-lined that adapts beautifully to other kinds of music. His wide range of interpretative skills varies from cooperation with contemporary composers (Mauricio Sotelo) and old music ensembles (Accademia del Piacere) to projects celebrating traditional art of flamenco (Zambra 5.1). Critics unanimously praise him as the heir of the late and great flamenco singer Enrique Morente. The word ‘arcangelism’ has been mentioned to define his beautiful melodic phrasing.

MARINA HEREDIA is considered one the world’s foremost female flamenco singer of the new generation. Daughter and granddaughter of exceptional flamenco singers, was raised surrounded by flamenco, debuting as a singer in 1992. She was 12. Since, she has earned her place among the best of her generation, winning awards for best recording in 2010 and 2013 from the Nation Flamenco Critics association and was just awarded with the Giraldillo prize, the most important award for a singer, at the Flamenco Biennale of Seville. The flamenco diva from the Spanish city of Granada, like her male contemporary and colleague Arcángel, delves deeply into the flamenco tradition.