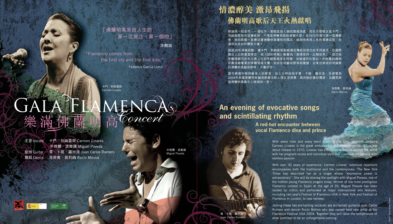 In the hands of two of today’s greatest Spanish artists, flamenco voice visits new geographies and conquers new musical horizons. This show brings together two generations of artists in a journey where flamenco blends with jazz, pop, boleros, and classical forms.

Carmen Linares is one of the living legends in flamenco singing. A master of the “jondo” style of singing, Linares has set her sound to the classical-oriented accompaniment of symphonic and chamber orchestras for nearly two decades. She was the first flamenco singer to perform with the New York Philharmonic Orchestra — but she has been equally forceful performing to the classic flamenco accompaniment of a guitar. While The New York Times praised her for her “extraordinary and expressive power,” El Mundo, in Spain, claimed “she possesses three invaluable virtues: power of communication, purity without purism, and all-around competence.” Her voice has the gritty quality of a blues singer. It’s a lived-in voice, textured by an age old wisdom, passed on generation to generation, and unteachable elegance. Carmen Linares is the grand dame of cante.

Miguel Poveda is one of the most respected flamenco singers in Spain and around the world. He has been awarded numerous prizes during his 30-year career: the 2007 National Music Prize, the chair of flamenco studies of Jerez de la Frontera, the Andalusia Medal in 2012, Seville Honorary Citizen, La Unión Award in the province of Murcia, and of Badalona. At the age of 45, he has released ten studio albums: Viento del Este (1995), Suena Flamenco (1998), Zaguán (2001), Poemas del exilio de Rafael Alberti (2004), Desglaç (2005), Tierra de Calma (2006), Cante i Orquestra (2009), Coplas del Querer (2009), arteSano (2012), Real (2012), Sonetos y poemas para la libertad (2015), Enlorquecido and El tiempo pasa volando (2018). His latest work, Enlorquecido (“Mad About Lorca”), is inspired on the poet Federico García Lorca and reached number two on the charts the second week after its release.