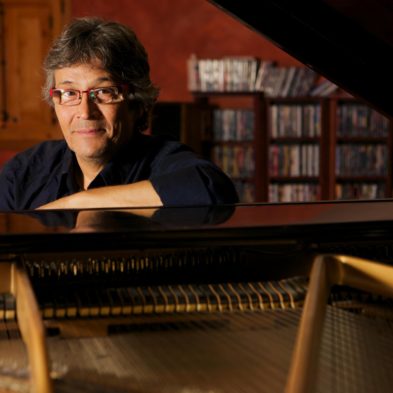 “To a listener unfamiliar with the work of Mr. Dominguez, it serves as a sampler of his stunning virtuosity, and joyous fusion of flamenco and jazz. To those already engaged in his musical voyage, it represents a snapshot along the way to new horizons, behind the moon, beyond the rain.” All About Jazz

Chano Domínguez is one of the most celebrated of jazz pianists and composers. His singular work is defined by his flamenco origins. In more than 40 years of his career, he has dazzled all kinds of audiences, including other musicians spanning both worlds of jazz and flamenco. His interpretive talents are highly sought after for his authentic integration of both jazz and flamenco traditions, working with an extensive range of colleagues such as Paco de Lucía, Enrique Morente, Jorge Pardo, Carles Benavent, Martirio, Wynton Marsalis, Paquito d’Rivera, Jack DeJohnette, Herbie Hancock, Jerry Gonzalez, Gonzalo Rubalcaba, Michel Camino, Chucho Valdés, Joe Lovano, and George Mraz, among others.