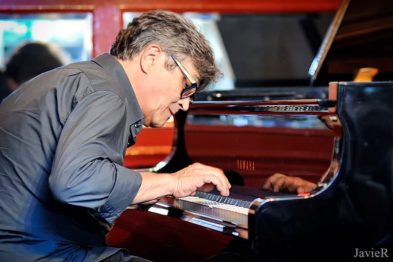 Chano Domínguez is possibly the first flamenco jazz pianist in the world and undoubtedly the most influential. Throughout his career he has collaborated with a wide range of musicians such as Paco de Lucía, Enrique Morente, Jorge Pardo, Carles Benavent, Martirio, Wynton Marsalis, Jerry González, Paquito D’Rivera, Jack DeJohnette, Herbie Hancock, Michel Camino, Chucho Valdés … In more than 40 years on the stage, he has conquered both jazz and flamenco audiences.

Chano Domínguez is one of the most celebrated of jazz pianists and composers. His singular work is defined by his flamenco origins.

In more than 40 years of his career, he has dazzled all kinds of audiences, including other musicians spanning both worlds of jazz and flamenco.
His interpretive talents are highly sought after for his authentic integration of both jazz and flamenco traditions, working with an extensive range of colleagues such as Paco de Lucía, Enrique Morente, Jorge Pardo, Carles Benavent, Martirio, Wynton Marsalis, Paquito d’Rivera, Jack DeJohnette, Herbie Hancock, Jerry Gonzalez, Gonzalo Rubalcaba, Michel Camino, Chucho Valdés, Joe Lovano, and George Mraz, among others.

Chano has achieved an unusual integration between the rhythms and languages of jazz and flamenco, creating a unique style that places him among the top musicians practicing this artform. Internationally acclaimed, he has influenced and changed the history of flamenco-jazz. His music has been played by many different ensembles and orchestras such as the Lincoln Center Jazz Orchestra, WDR Cologne Big Band, Orquesta Nacional de España, Orquesta Nacional de Latvia, Orquesta de Cámara del Vallés, and the Orquesta Nacional de Costa Rica.

In 2016 he’s been nominated for his fourth Grammy, this one a Latin Grammy for his latest release “Bendito”. This recording features Chano as producer, composer and pianist with his preferred ‘cantaor’ (flamenco singer) Blas Cordoba aka “El Kejio”.

Chano is also a seasoned educator, available for master classes, workshops and residencies. He has previously taught at Taller de Músics in Barcelona, The Music Conservatory of Bogotá, the Julliard School in New York and at the School of Music at the University of Washington, among others.

Chano is currently living in New York, where Sunnyside Records has just released his new piano solo album Over the Rainbow.