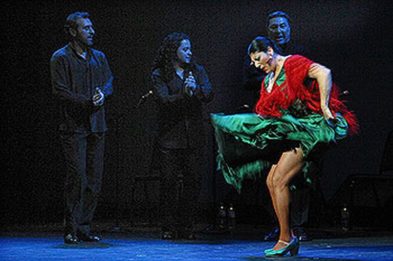 This colorful collection of flamenco expressions is reflected in a program where all points of view coexist. The Gala of Seville brings face to face Manuela Carrasco´s and Chocolate’s devotion to traditional flamenco, with the evolution of flamenco’s rising stars, such as the male dancers Israel Galvan and Juan de Juan.

Antonio Nuñez “Chocolate”, has been one of the maximum figures in the Flamenco Singing. With a style rooted and based on orthodoxy, under the denomination of “cantaora purity” and qualifiers such as “black sounds”, which was applied regularly to his singing by flamencologists and journalists. Chocolate was influenced by the cantes de la Alameda performed by Tomas Pavón and Pastora Pavón “La Niña de Los Peines” among others, styles that Antonio Nuñez greatly enriched with his personal contribution. Being a very complete cantaor, Chocolate stood out especially for Soleá, Seguiriyas and Fandangos, styles in which he has been one of its most important interpreters.

Manuela Carrasco, muse of poet and painter alike, represents the purity and the essence of traditional flamenco dance. Her historic career and inimitable style have assured her the admiration of “aficionados” the world over. She has kept alive the expressive power of flamenco dance with unfaltering loyalty to the gipsy dancer doctrines. She is considered one of the most moving and charismatic flamenco performers to have graced the world’s stages.

Israel Galván Renovator, transgressor, avant-garde, sublime, crazy… The figure of the dancer Israel Galván (Seville, 1973) has been described in a thousand and one ways. On the stage, this renowned artist, who has traveled all over the world exhibiting his talent, leaves no one indifferent. He learned flamenco since he was a child at the academy of his father, José Galván, as did Pastora, his sister, also a member of the profession.

Juan de Juan He studied at the Royal Conservatory of Seville, while taking classes with teachers of the stature of Ramón Barrús, Manolo Marín, Juan Amaya, Juan Ramírez, Ciro, Manolete, Ramón Barrull and Antonio Canales, who guided him in the professional field.