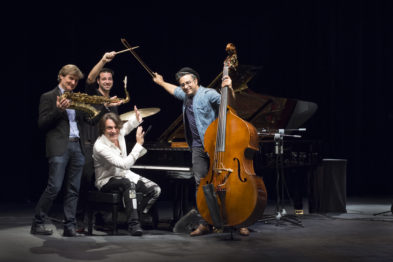 Three great musicians get together for breaking new music barriers.

Born in 1969 in Seville to a prestigious flamenco family boasting a long line of legendary performers, Dorantes absorbed the roots of flamenco at home. He also studied piano at the Real Conservatorio Superior de Música of Seville from a very young age. Consequently, he has always searched for a synthesis of traditional flamenco, classical and avant-garde music. Scrupulous about technique, innovative in the composition and perfect in the execution, Dorantes’ approach has led to him becoming an important name in the word of flamenco piano, forging a new path in piano history; a voice nurtured by Spanish flamenco and yet all his own. He is the winner of multiple awards, including most recently the 2012 Girandillo award for the best music for Contrabass (Renaud Garcia-Fons) and the 2014 Joaquín Master of the Order of Performing Arts in Andalusia.
Adam Ben Ezra

Double-Bass phenomenon, multi-instrumentalist and online sensation Adam Ben Ezra; a man seemingly on a mission to bring his instrument from its status as a background note to the dominant front-presence it deserves. For the past few years Adam has been pushing his craft in new, exciting directions and carving out a unique spot for himself in today’s international musical landscape, with both his virtuosity and musicianship earning him great success along the way. With more than ten million hits on YouTube and a strong following on all social media platforms, it is clear Adam is a bonafide star in the internet world. However, his success is certainly not limited to the web, having performed around the globe in major international music festivals and shared stages with some of the world’s fusion giants – including Pat Metheny, Victor Wooten and Richard Bona – over the last few years. His work has been shown at industry leading publications, such as BBC World Service, CBS News, Time Magazine and The British Telegraph to name but a few. Jazz FM has defined his appearance as ”a dazzling virtuosity and breath-taking athletic performance”.