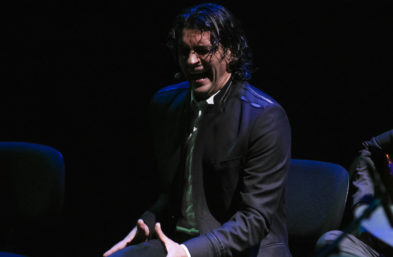 Described by The Washington Post as the “most charismatic performer” and a “connection to the Gypsy source”, Ismael Fernández was born in Seville, of Gypsy descent, grew up performing in flamenco festivals throughout the world with his internationally renowned family, “La Familia Fernández”. His career began in Spain’s premier flamenco tablaos such as El Cordobes in Barcelona, La Carboneria in Seville and other famous flamenco cuevas of Granada.

In 2004, Ismael won the National Contest of Cordoba, singing for the famed dancer Soraya Clavijo and was a finalist in the Festival De Cante De La Union. He joins his family regularly to perform in the celebrated Bienal de Flamenco de Sevilla. Throughout his career, Ismael has worked with flamenco legends such as Antonio Canales, Farruquito, Marina Heredia, El Torombo, the prestigious Orchestra director Gustavo Dudamel and Rafaela Carrasco to name a few.

He currently resides in New York, where he moved in 2014 together with the flamenco dancer Sonia Olla, her partner on and off the stage. Since then, he combines the Cante classes with performance at internationally acclaimed venues such as The New York City Center, The John F. Kennedy Center for the Performing Arts (Washington DC), Carnegie Hall (NY), Walt Disney Concert Hall (LA). He created a large number of shows together with Sonia, such as Tablao Sevilla, Entretiempo, Tiempo Al Aire and Por los Caminos.