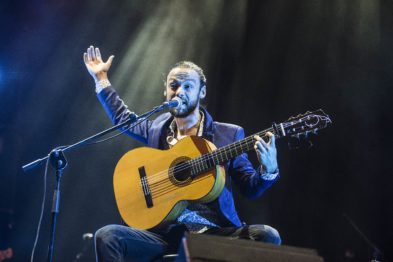 Diego Guerrero was born in Huelva, Andalusia. He trained, day by day, at the Conservatories of Seville, Granada and Córdoba, where he studied composition and orchestral music, and at night, in the flamenco neighborhoods with a guitar next to a candle. And so began his daring proposal to bring flamenco to other music. It is in 2004 when he is elected director of the Big Band Flamenca de Rubem Dantas, which puts him at a stroke in the elite of Spanish Flamenco-Jazz, thanks to an original work as arranger never seen before.

In 2009 he made the leap to the capital to launch his career as an interpreter, where, soon after, he is already related to the elite of flamenco and jazz. He revolutionized the Madrid night with the birth of the Diego Guerrero Flamenco Jam, at the legendary Café Berlin. For 3 years, the greatest flamenco names met, and they let themselves be carried, confident, by a sublime accompaniment, designed and arranged by Diego’s hand. They are just some of them… And so an unavoidable weekly appointment was created, that since its birth and until its Last day, he summoned musicians and followers from the five continents.

It is from 2013 when Diego decides to prepare what would be his first album, ‘Vengo caminando’, with appearances at festivals such as Etnosur, JazzyMás Festival, Grec Festival of Barcelona, ​​La Suma Flamenca, Womad, La Noche Blanca de Flamenco de Córdoba, Gent Festival or the San Sebastian Jazz Festival, making the leap to the main theaters and auditoriums of Australia, New Zealand, South Korea, Croatia, Belgium, Italy and Germany.