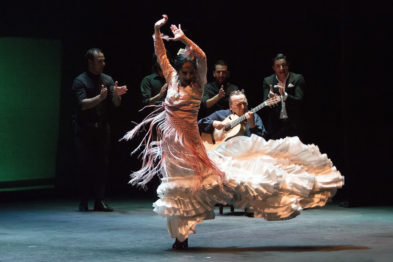 “A fistful of Spain’s greatest dancers colluding in a foot-stomping, shawl-swirling, castanet-clicking party” — The Stage (UK)

Gala Flamenca has long been the centerpiece of Flamenco Festival, bringing together exceptional dancers and singers in an evening that demonstrates the range and vibrancy of flamenco. In honor of Flamenco Festival’s 20th Anniversary Season, this year’s very special Gala de Andalucia presentation features Eduardo Guerrero, known for his “marvelously eccentric solos” (The New York Times); María Moreno whose astonishing dance pays tribute to the traditional style of Cádiz, Mercedes Ruiz, lauded for her “commanding truth and virtuosity” (Financial Times); and rising singer Maria Terremoto, the youngest artist ever to receive the Giraldillo Award for New Artist at the Seville Flamenco Biennial.

Specialized critic said that he is brutal, radical. He dances with fury and from the guts. Naked. An exorcism. But this Flamenco dancer never loses his elegance, the style that is his hallmark. It was in 2002 when he started to work with major artists on the national scene who valued Eduardo’s physical ability, flawless technique and evident quality developing leading roles in: the company of Aída Gomez, Eva La Yerbabuena, Rocio Molina, The Spanish Ballet directed by Javier Latorre, Amador Rojas’ dance company, Antonio Canales, David Palomar…

She collaborates as a guest artist in a cante recital of Arcángel, celebrated in Abu Dhabi (Arab Emirates) and with José Mercé in the Gran Teatro Falla de Cádiz.

In June 2017, María Moreno traveled to New Mexico to present ‘Alas de recuerdo’ at the Albuquerque Flamenco Festival and to Madrid, where she performed at the Suma Flamenca program. In september 2018, this artist presented her show ‘De la Concepción’ at the Bienal de Flamenco of Seville.

María Terremoto was the youngest ever artist to lift the Giraldillo award for the Revelation at the Seville Flamenco Biennial. Following a career replete with glowing reviews, in which she has been labelled “The flagbearer for young cante singers”, she is now releasing her first album, La huella de mi sentío, in which she records the cantes that have been with her since childhood. An orthodox expression of cante that mainains coherence with the modern sounds of flamenco.