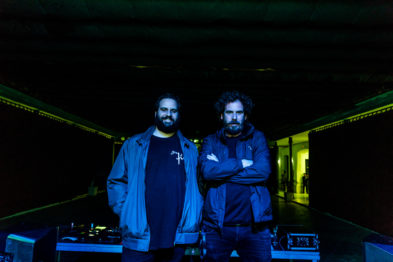 Pedro and Benito Jiménez have been entangled with remix, live cinema, digital folklore or political remix video for more than two decades. Both in more personal proposals such as ‘Borderhack’, around migration and borders, or ‘No Media Detected’, about the media; as in more collective spaces, his continued collaboration with bulos.net (Santi Barber and Raúl Cantizano) in projects such as ​’Carta Flamenca a Nam June Paik’​,​ ​‘Turismo sin fin’​ o ‘DEF, DiálogosElectroFlamencos’, his well-known works with Niño of Elche in ‘Raverdial’ and ‘In the Name of’; his presence at the Flamenco Biennial of Seville with ‘Cartuja a Rás’ or his collaborations with Rocío Márquez and Manuel León Moreno in ‘La Costilla de Rocío’ reveal his versatility and taste for sound, audiovisual and conceptual research and experimentation.

His ‘audiovisual catastrophes’ have been seen in spaces such as Sónar Festival, the Flamenco Biennial of Seville or the Nordic festival Norpas, to name a few. In VJ / DJ duo format, they are nourished by audiovisual experimentation and live remixing, pecking from genres as peculiar as flamenco or electronica accompanied by a powerful layer of critical culture. His sessions full of audiovisual cafés include live electronic and analogue instruments amassed with illicitly appropriate material from the public domain or donated by various artists. In addition, as members of ZEMOS98​, they have worked on the programming and production of Live Cinema shows, the most recent being € urovisions of European Souvenirs.

They have edited on the net.label Ruidemos and their latest audio-visual references are part of the Mexican net.label specialized in audio-narrative Música para Espías​ being the most recent of February 2013 entitled “Be Aware!” (50 minutes of noise & bass that responds to current political moment). They have signed the official video clip of “​“La Rave de Dios​’ by the Sevillian group Pony Bravo, which accompanies the song ‘Markets’ or’ ‘Rumba y bomba de Dolores Flores’ by Niño de Elche and collaborated with the video clip “Black Trinitron” by S Curro & Papa Wilson, or the video ‘​‘Un maravilloso final’​’ for the poetry of Javier Gallego ‘Crudo’, and the last one for BSN Posse ‘Diamonds in ma funk’.