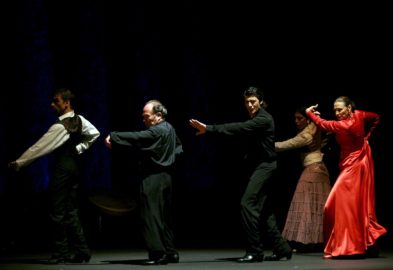 This gala all-star event features the legendary Merche Esmeralda, noted for her electrifying roles with the National Ballet of Spain and her performances in Carlos Saura’s Sevillanas and Flamenco; master dancer, choreographer and teacher Manolo Marin, who will direct the program; Javier Baron, the renowned Giraldillo prize-winning dancer acclaimed for his powerful and exquisite performances; the commanding Rafael Campallo, who appeared as a featured soloist with Compañia Andaluza de Danza in the 2004 Flamenco Festival; and Soledad Barrio, famed star of Noche Flamenca known for her smoldering performances.

Manolo Marín, dancer, choreographer and teacher, is a self-taught professional who claims to have learned from “looking in the window of (the dancer) Enrique el Cojo.” Years after his final stage appearance, María Pagés brought him back to public performance with her dance company in the programs La Tirana and Flamenco Republic. As a choreographer, Marin has collaborated with Cristina Hoyos, the Compañía Andaluza de Danza, and the National Ballet of Spain, and participated in the making of the film Carmen by Carlos Saura, and Azabache, a show created for the Seville Expo of 1992. For the last 30 years in Seville, he has directed one of the most prestigious academies in flamenco dance, training some of today’s leading dancers, including Cristina Hoyos, María Pagés and Rafael Campallo.

Merche Esmeralda, born in Sevilla, was trained at the school of Matilde Coral, and spent the first stage of her professional life at the tablaos in Seville and Madrid. In the late sixties, she formed her own company, received the first-place award in Cordoba’s National Flamenco Art Contest, and began to tour internationally. In 1972, she received the National Dance Award and Dama de la Orden Jonda in Jerez de la Frontera. She joined the National Ballet of Spain under Antonio Gades in 1979, starring in El Amor Brujo and other shows. In 1982/3 she worked with GIAD- Ballet Español de Madrid and in 1986 she returned to the National Ballet with Maria de Avila as director. She starred in Medea with choreography by José Granero and Manolo Sanlúcar, and also participated in Soleá and Don Juan. She later directed the Ballet de la Región de Murcia, and collaborated with Joaquin Cortes in Cibayí. In 1995, she appeared in Flamenco, directed by Carlos Saura, and Alma Gitana, directed by Chus Gutierrez. In 1996, she re-launched her own company with the show Mujeres with Sara Baras and Angelita Vargas. In 2002, she performed with Juan Carlos Santamaria Company in El amor brujo. In recent years she has alternated her intense academic work with various artistic works, creating her own dance school in Madrid and participating regularly at the Jerez Festival.

Javier Barón, born in Alcala de Guadaira, began studying in Seville with Pepe Rio, and started his career in the companies of Luisillo, Rafael de Cordova, Ciro and Rafael Aguilar. He joined the National Ballet of Spain, where, under the direction of Antonio Ruiz and Maria de Avila, he became a soloist. In 1980, he was awarded the RTVE (Spanish TV and Radio Channel) “Gente Joven” prize and in 1988 he attained master status, receiving the Giraldillo de Baile prize at the Bienal de Flamenco in Seville – one of the most valued awards at the time. After receiving the Giraldillo, he went on to garner recognition for his work as a soloist and with other artists, and to participate in important events at theatres and festivals around the world. He toured Eastern Europe with the Victor Monje Serranito group, and participated in Cantaora of Carmen Linares and Flamencos en Nueva York of Gerardo Nuñez. He also worked with Rafael Riqueni, Enrique Morente, Manuel Soler, Milagros Mengibar, Manolo Franco, Calixto Sanchez, Jose Merce, Paco Pena, Chano Lobato, and Chano Dominguez. In 1997, sponsored by the Culture Department of the Andalusian Government, he formed his own company, which premiered El Pajaro Negro (The Black Bird) in collaboration with Ramon Oller at the Central Theatre of Seville. His other shows include Solo por arte (1998), Baile de Hierro, Baile de Bronce (2000), Dime (2002) and Notas al pie (2004).
Soledad Barrio was born in Madrid and trained in flamenco and Clasico Espanol. She has appeared as soloist with the Ballet Espanol of Paco Romero, Manuela Vargas, Blanca del Rey, Luisillo, El Guito, Manolete, Cristobal Reyes, and Toleo, and performed throughout Europe, Japan and North and South America. Soledad recently received the 2001 “Bessie” Award for Outstanding Creative Achievement.” She is a founding member of Noche Flamenca and is married to Artistic Director Martin Santangelo. They have two daughters, Gabriela and Stella.

Rafael Campallo, born in the Cerro del Aguila, Seville in 1974, received his early training from José Galván and Manolo Marín. By the age of 16, he was performing as a soloist or guest artist in Spain and Japan. His career skyrocketed in 1996 when he took part in two productions: Por aquí te quiero ver by Manuel Soler and La raíz del grito by Manuela Carrasco. That same season he joined the Compañía Andaluza de Danza (CAD), under the direction of Mario Maya, traveling all over the world. In 1999, CAD’s new director José Antonio, asked him to return as guest choreographer and first dancer for Golpes da la vida. That same year he won the ‘El Desplante’ dance award at the Festival de La Unión, and began working with Vicente Amigo, a collaboration that continues to this day. At the 2000 Bienal de Flamenco in Seville he appeared in Trilogía with Andrés Marín and El Torombo, and at the 2002 Bienal he was a featured guest in Juana Amaya’s show. In 2003, he performed at the New York Metropolitan Museum with the show Rafael Campallo y Jóvenes Flamencos. In 2004, he presented Campallerías at the Jerez Festival; premiered his own company’s show, Don Juan Flamenco, at the Bienal deFlamenco in Seville; and appeared at the New York Flamenco Festival with Compañía Andaluza de Danza.

Adela Campallo, one of the rising stars in the new generation of flamenco dancers, was born in 1977 in the Cerro del Aguila, Seville. She began her studies at Manolo Marin´s academy, and later trained with José Galvan. She has also learned from Eva Yerbabuena, Antonio Canales, Javier Barón, her brother Rafael Campallo, Adrían Galia, and Manolete. She has performed in various shows with the Compañía Andaluza de Danza, Andres Marin, Manuela Carrasco, and Antonio Canales, and appeared in many tablaos in Seville, Barcelona and Tokyo.