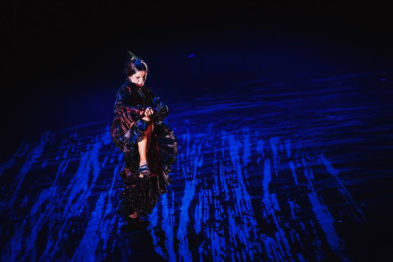 It is in the show ‘Locos del tiempo’ that he makes his debut with other Cádiz artists such as Pilar and Juan Ogalla in the Central Lechera de Cádiz theater.

With Eva Yerbabuena also participates in the premiere of the show ‘El huso de la memoria’ at the Teatro de la Zarzuela in Madrid and, at the X Anniversary of the Company Eva la Yerbabuena, held at the Generalife Gardens of Granada, shares the stage with artists of the likes of Miguel Poveda, Marina Heredia and Arcángel. In the same scenario, he performs the season in the XI edition of the program ‘Lorca y Granada’, with the show ‘Federico como Lorca’.

He began his solo career in 2006, at the Bienal de Jóvenes Flamencos de Sevilla, held at the Jardines del Valle. It is also required at festivals such as Los Veranos del Corral (Granada), Festival ‘Larachí flamenca’ (Seville), Fiesta de la Vendimia (Jerez de la Frontera) and Festival de la Fortuna (Madrid). He takes part in the XXXV International Flamenco Congress held in Cádiz and participates in the premiere of the show ‘Kalho Calo’ under the artistic direction of Rafael Estévez, which premieres at the Festival de Jerez.

She collaborates as a guest artist in a cante recital of Arcángel, celebrated in Abu Dhabi (Arab Emirates) and with José Mercé in the Gran Teatro Falla de Cádiz. Participate in the extraordinary concert that celebrated the 150th anniversary of the Teatro Principal of Puerto Real (Cádiz) with the Manuel de Falla Orchestra and the singer David Palomar.

Along with Rafael Campallo he premieres the shows ‘Puente de Triana’ and ‘Triana, the other shore’, with which he travels to Italy and Canada.

In November 2014, in the Sala Lechera de Cádiz, ‘Alas de Recuerdo’, a show that features the accompaniment to the singing of Enrique ‘El Extremeño’ and Juan José Amador, on the guitar of Joselito Acedo and the palmas of Roberto Jaén.

The show has been presented at the Flamenco Thursdays of Cajasol and, in 2017 at the Festival de Jerez, which gives it the ‘Revelation Artist Award 2017′.

In June 2017, María Moreno traveled to New Mexico to present ‘Alas de recuerdo’ at the Albuquerque Flamenco Festival and to Madrid, where she performed at the Suma Flamenca program.

In september 2018, this artist presented her show ‘De la Concepción’ at the Bienal de Flamenco of Seville.