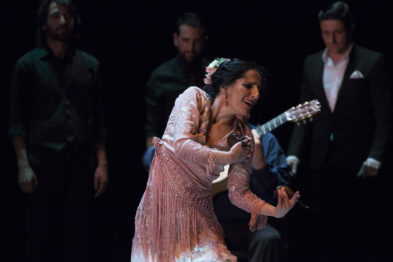 In 2002 Mercedes Ruiz began her career as a solo performer. That same year she debuted with Andrés Marín in the Bienal de Sevilla, where she received a Giraldillo Award. This award drove her to form her own company in 2003, premiering with Dibujos en el aire (Drawings in the Air) at the Festival de Jerez. Her next show, Gestos de Mujer (Gestures of a Woman), premiered far away from her homeland, at the Lyon Dance Biennial, and has been performed on other important stages in Europe and America.

In these first solo productions, Mercedes Ruiz left no doubt as to her aesthetics – a modernisation of traditional styles and an evolution within classical dance. This approach was visible in Juncá, which premiered at the Bienal de Sevilla and won the Critics’ Award as Best Show at the Festival de Jerez. Mercedes Ruiz had already established herself on the world stage, and as a result, the premiere of her fourth solo show, Mi ultimo secreto (My Last Secret), was held at the prestigious Festival Montpellier Danse. For her next show, Perspectivas (Perspectives), she returned to the Festival de Jerez, once again picking up the Critics’ Award for Best Show.

Mercedes Ruiz has also been exploring the creative possibilities of camera productions or small format, where the relationship between flamenco singing, guitar and dance can be intensified. This gave rise to Baile de palabra (Dance of the Word), while she also collaborated on the joint project Las cinco estaciones (The Five Seasons), alongside Blanca del Rey, Marco Flores, Olga Pericet and Laura Rozalén.

In 2015, for her next show, Mercedes Ruiz decided to delve into the depths of her being. Out of this deep reflection on life and art, the show Ella (Her) was born. It opened the 2015 edition of the Festival de Jerez – a world premiere – and won the Audience Prize. While Ella was in production, she also took on the challenge of choreographing Zaguán for the Spanish National Ballet and Carmen in Mahón. A year after Ella closed, she decided to reconnect with the spontaneity and freshness that has always defined flamenco, in Déjame que te baile (Let me dance for you, 2016).