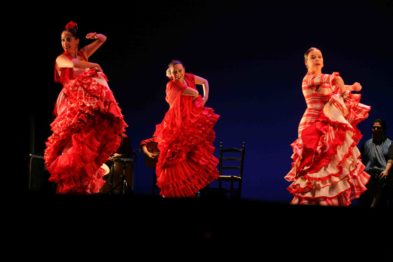 How should flamenco be defined today, by its classic references or its thirst for innovation, the maturity of experience or the creative risk of youth? Three generations of flamenco dance’s leading solo bailaoras offer their own answers to these questions with Mujeres. Merche Esmeralda is not distracted by novelty: her dignified approach to dance is informed by her sense of timelessness. Belén Maya embraces dance and life as the unity of a woman’s body, mind and spirit. Rocío Molina, the youngest of the three dancers, distances herself from the harried “marketing” of dance and sits back to reflect. In silence or out loud, she denounces what she sees as the way to easy success.
Mario Maya, Artistic Director

Mario Maya (Director)
Dance worker and maestro, a sensitive man and dancer-bailaor, choreographer and stage director, a radically contemporary artist always with an eye on tradition, winner of the National Dance Prize and Medal of Andalusia. A student of Pilar López’s, an institution beyond time and fads, a committed gypsy and the creator of legendary shows such as “¡Ay!”, “Jondo” and “Camelamos Naquerar”, a poetic personality full of cunning and surprises, founder and creator of the Compañía Andaluza de Danza in 1992, for whom he prepared the show “Réquiem para el fin del milenio”, “possibly the only requiem existing in the flamenco world”. I was born in the heart of a gypsy family, so it wasn’t at all strange to sing, dance or play the guitar. I grew up in the neighborhood of Sacromonte and I started dancing when I was little. I bought a pair of flamenco boots from a ragman; they had two holes in the soles each of which I used to cover with carton every time I would dance. I used to do this exercise several times in my rehearsals until I got tired of it. Afterwards I started dancing for tourists in the caves of Sacromonte. When I was still a little boy I realized how important that was in my life; my great fondness and vocation for cante and guitar, and above all, the discipline and daily rigor in dance. I think I’ve been a good enthusiast … Man needs culture because he’s a gregarious being by nature, a social being, and he needs to belong to a steady group where he feels comfortable and emotionally secure. Each generation has fewer and fewer chances to gain knowledge which can only be gotten across “in-situ”. Art isn’t brute strength, but sensitivity; it isn’t dead easy virtuosity, but unexpected grace. The hard thing about art is to make it seem easy, inexplicable and indefinable. I go back over my life and my career, my dreams and achievements, my passion for Mexico and for Lorca. I deny success and failure, but continue as excited as the very first day: “Now my dream is to make my film “Dialogo del Amargo”; I don’t know if I’ll manage to. I hope not to be very old by then”. Lastly, I would like to recall that extraordinary principle of dance, which applied to our flamenco context would go something like this: where the regard goes so goes the mind, where the regard and the mind go so goes the body, where the regard, mind and body go so goes the spectator. If the regard, mind and body are absent, the spectator is absent too, and it isn’t possible to get anything across.

Merche Esmeralda Artist from the cradle, Sevillian Merche Esmeralda’s first steps were in the art of flamenco singing, led by Adelita Domingo, although at the age of 16 she debuts as solo bailaora, daring to spontaneously start singing in front of mythical Antonio Mairena.
In 1968 she obtained the National Dance Award at Cordoba’s National Flamenco Art Contest and in 1970 she received the Popularity Award, given by the daily newspaper Pueblo. In 1973 she was distinguished as Lady of the Jonda Order and Flamencology Scholar in Jerez de la Frontera. In 2007 she receives the Compás del Cante Prize, an award which is called “The Flamenco Nobel” and in 2008 the Flamenco Award Calle de Alcalá del Festival Flamenco Caja Madrid. In 1980 she enters Spain’s Ballet Nacional, directed by the great Antonio Gades. She played main character for “El Amor Brujo” (A love bewitched) and the Flamenco part of the repertory up to 1982. Between 1982 and 1983 she worked with GIAD- Ballet Español de Madrid and in 1986 she went back to Ballet Nacional and stayed there until 1989, when she was called to create and direct the Ballet in the Region of Murcia, which reached a very high level in very little time. Standing out among its numerous creations are El Cielo Protector, a theater-dance show which she herself directed and starred in; Medea; La Sinfonía de la lo; Flamenco and various other exclusive pieces. In 1995 she filmed “Flamenco”, directed by Carlos Saura and “Alma Gitana” (Gypsy Soul), with Chus Gutiérrez as director. In 1996 she creates her own company with the show “Mujeres” (Women) and enters the Board of Directors of ACADE (Dance Schools Association). In 2005 she was part of the Gala Flamenca presented in Tokio and Aichi at the I Flamenco Festival of Japan organized by the Spanish Pabillion. Since 2006 she has been a civil servant of the Community of Madrid at the Conservatorio Superior de Danza, continuing with courses and other teaching jobs.

Belén Maya The daughter of two great flamenco artists, Carmen Mora and Mario Maya, Belén Maya began her dance studies at the renowned studio Amor de Dios in Madrid. She has studied ballet as well as classical Spanish dance, jazz and contemporary dance. Her flamenco teachers have included Paco Fernández, Manolete, La Tati, El Güito, Carmén Cortés, La Toná, and many others. Maya studied at the School of the Spanish National Ballet, and later relocated to Seville in order to focus on flamenco. She joined her father’s Mario Maya Company, where within three years she became principal dancer. Meanwhile, she also gained experience in the tablaos of Seville. Maya spent six months in Tokyo at the tablao Flamenco of Tokyo, and upon returning from Japan, became the principal for the Dance Company of Andalucía. She was invited by Carlos Saura to represent the new generation of flamenco in his film Flamenco. Belén’s performance in this film would become a milestone in flamenco dance as interpreted by women, opening new avenues in terms of concept, musicality, movement, and costuming. In 1996, she formed company comprised entirely of bailaoras: Yolanda Heredia, Teresa Nieto, Rafaela Carrasco, and Isabel Bayón. In 1997 she was invited by Mayte Martín to the Grec Festival in Barcelona. From this pivotal collaboration was born a shared company, Mayte Martín and Belén Maya. Their collaborations have received outstanding critical praise at venues such as the Festival of Jerez (2002 and 2003), the Royal Theatre of Madrid, the Grec Theatre of Barcelona, the Autumn Festival of Madrid, the Central Theatre and Lope de Vega Theatre of Seville, the Music and Dance Festival of Granada, Teatre de la Ville of Paris, the Spai of Barcelona, and New York’s Symphony Space. In 2004, Maya participated in Los Caminos de Lorca (The Paths of Lorca) with the Dance Company of Andalucía under the direction of Pepa Gamboa and performed in the premiere of Fuera de Los Límites (Beyond Boundaries) together with Rafaela Carrasco under the direction of Ramón Oller. In 2005 she presented the show Dibujos (Drawings), in Madrid as part of the Summers at La Villa series to both public and critical acclaim. In 2006 this was restaged and premiered at the 10th Flamenco Festival in Jerez.

Rocío Molina Born in Málaga in 1984, Molina started dancing at the age of three. By the time she was 11 she was winning prizes in national dance contests. She began her studies at the Conservatorio Profesional de Música y Danza de Málaga, and finished her degree at the Real Conservatorio de Danza de Madrid in 2002, graduating with honors. In January 2001 Molina joins the María Pagés Company as a dancer and choreographer, touring Italy, Japan, Canada and the U.S., taking part in the Gala de Andalucía at New York’s City Center. In the year 2003 she a takes part in Flamenco Festival USA, performing as a soloist together with Manuela Carrasco, Chocolate and doing a duo with Israel Galván. In 2005 she premieres her first show, Entre Paredes, at the Teatro Principal in Vitoria which she does a tour with around different provinces in Andalusia. At the first edition of the Festival Málaga en Flamenco in 2005, she premiered El Eterno Retorno, based on texts by Nietzsche, with Juan Carlos Romero as musical director, Pepa Gamboa as stage director and the collaboration of Pasión Vega and Teresa Nieto. In August 2006 she premiered Turquesa como el Limón. Molina’s latest show is Pasos Contados directed by Pepa Gamboa and featuring Diego Carrasco as guest artist.

Diana Navarra Diana Navarro (Malaga, 1978) is a rising star, singer known as both a keeper of tradition and a musical explorer. A leading young interpreter of the romantic southern Spanish copla and saeta styles, and flamenco, Diana’s world influences include fado, music of the Middle Eastern, pop and celtic song. Diana’s debut solo album, No te Olvides de Mi, has sold over 200,000 copies and received many international honors, including a Latin Grammy Award nomination. She released her second album, the emotional and uplifting 24Rosas, to critical acclaim in 2007. Diana began her career at the age of 9, singing with the group Renacer. She took copla classes and sang with Maestro Gordillo and Rafael Castro de Málaga. She subsequently won over twenty copla awards and two national saeta prizes over the next twenty years, before making her recording debut.