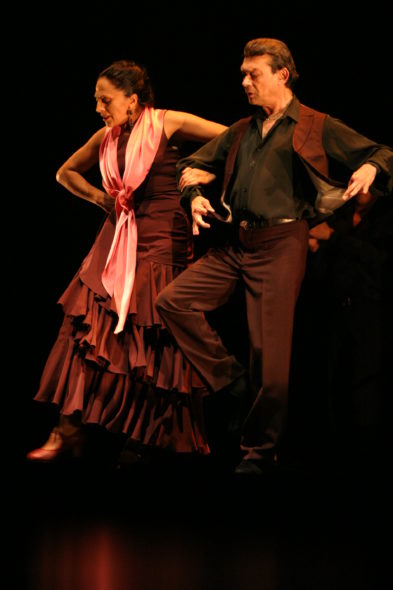 From the roots to the branches, from the mastery of the Soleá by Eduardo Serrano, El Güito, to the new blood of Rafaela Carrasco by Malagueñas. From the promising fusion between contemporary dance and classical Flamenco that practices Carlos Rodríguez to the settle in the strings of Gerardo Nuñez Guitar. From the young heels of Rocío Molina to ones that walk to the maturity, like Belén Maya or Carmen Cortés, that has caught her Granaínas. On the stage, take a look at the Jondo world of the last decades. Innovation, tradition, union and reunion, experience and youth in time to the music.

Manolo Marín Dancer, choreographer and teacher, Manolo is a self-taught professional who claims to have learned from “looking in the window of (the dancer) Enrique el Cojo.” Years after his final stage appearance, María Pagés brought him back to public performance with her dance company in the programs La Tirana and Flamenco Republic. As a choreographer, Marin has collaborated with Cristina Hoyos, the Compañía Andaluza de Danza, and the National Ballet of Spain, and participated in the making of the film Carmen by Carlos Saura, and Azabache, a show created for the Seville Expo of 1992. For the last 30 years in Seville, he has directed one of the most prestigious academies in flamenco dance, training some of today’s leading dancers, including Cristina Hoyos, María Pagés and Rafael Campallo.

Merche Esmeralda Born in Sevilla, Esmeralda was trained at the school of Matilde Coral, and spent the first stage of her professional life at the tablaos in Seville and Madrid. In the late sixties, she formed her own company, received the first-place award in Cordoba’s National Flamenco Art Contest, and began to tour internationally. In 1972, she received the National Dance Award and Dama de la Orden Jonda in Jerez de la Frontera. She joined the National Ballet of Spain under Antonio Gades in 1979, starring in El Amor Brujo and other shows. In 1982/3 she worked with GIAD- Ballet Español de Madrid and in 1986 she returned to the National Ballet with Maria de Avila as director. She starred in Medea with choreography by José Granero and Manolo Sanlúcar, and also participated in Soleá and Don Juan. She later directed the Ballet de la Región de Murcia, and collaborated with Joaquin Cortes in Cibayí. In 1995, she appeared in Flamenco, directed by Carlos Saura, and Alma Gitana, directed by Chus Gutierrez. In 1996, she re-launched her own company with the show Mujeres with Sara Baras and Angelita Vargas. In 2002, she performed with Juan Carlos Santamaria Company in El amor brujo. In recent years she has alternated her intense academic work with various artistic works, creating her own dance school in Madrid and participating regularly at the Jerez Festival.

Carmen Cortés Carmen Cortés, the electrifying Gypsy dancer celebrated for her performances of flamenco puro, is renowned throughout the world for her sensuous and passionate style. In addition to training in flamenco, she acquired a grounding in classical dance at the School of the National Ballet of Spain. After performing at Los Canasteros tablao, she became the lead dancer of Mario Maya’s company. Over the years, many of Spain’s most popular dancers, including Joaquín Cortés and Antonio Canales, have performed in her company. She has been noted for her productions of La Puerta del Silencio and Celestina, as well as Salome, the first flamenco version of the Oscar Wilde work. As a soloist and with her company she has participated in the most important European dance festivals. She was the first bailaora to choreograph a granaina, a flamenco palo (style) with a free rhythm. Her shows includes the importance of the poets in her creations, in special Federico García Lorca in “Women of Lorca”; “To Federico”; “Yerma”… with this show she obtained the award as “Best dancer of the performing arts” in 1998. Her last show “Piezas Unicas” is a recompilation of her five most famous choreographies, specially her soleá. Recognized by critics as “One of the best dancers of our time” (El Pais), every year, Cortés offered one of the most prestigious courses with her husband Gerardo Núñez. Carmen Cortés is one of the most prolific dancers of flamenco with over 22 shows which have toured internationally since the creation of his company in 1988 with the show “Flamenco-flamenco”.

El Guito A reference in the history of flamenco, Eduardo Serrano Iglesias, El Güito, danced since he was a child. At the age of 14 he made his professional debut. And he did it like so many outstanding figures of the dance, under the protection of Pilar López. The Theater Palace in London was the stage for his debut, and Antonio Gades, Mario Maya, Curro Vélez and Alberto Portillo, among others, were his partners. La Quica and Antonio Marín, of whom he was first a student and then an assistant, were among his teachers, and El Güito was in his beginnings a representative of the most orthodox side of flamenco, until the mid-sixties, when his interpretations moved away from the classical. Together with Mario Maya and Carmen Mora, he formed in the early seventies the Trío Madrid with which he reaped great success. Tours as guest artist with the Ballet Nacional de España, the company of Manuela Vargas and the Ballet Español de Madrid, in which he danced as guest artist, came later. Creator of productions such as his personal tribute to Carmen Amaya, Raíces Gitanas and Flamenco Puro, among others, El Güito sponsors a personal interpretation of the soleá, already inscribed in the history of flamenco dance.

Rafaela Carrasco Rafaela Carrasco’s approach to flamenco dance can be summed up by the title of her 2004 piece Fuera de los límites (Beyond the Limits), created with dancer Belén Maya. Carrasco is a revolutionary creator of cutting edge flamenco choreography. Carrasco began dancing sevillanas when she was six years old and soon began studying classical Spanish dance at renowned Maltilde Coral academy. After graduating, she joined the Mario Maya flamenco dance company. At 23 she trained as a soloist in Madrid and performed as a lead dancer in performances by various choreographers. In 2002 Carrasco formed her own company, and that same year she won prizes for Best Choreography, Best Composition, and Outstanding Dancer at Madrid’s Dance and Flamenco Choreography Competition. The Rafaela Carrasco Company has mounted six productions. Her first full-length work, La Musica del Cuerpo (The Music of the Body), had its debut at the 2003 Jerez Festival to great renown. The Washington Post deemed her work Una Mirada al Flamenco (A Look at Flamenco) “A bravura display…coherent and true to its roots.” In 2007 she premiered Del amor y otras cosas and next year “ConCierto Gusto” at the Jerez Flamenco Festival, and Vamos al Tiroteo, her next show, won both the Giraldillo and the Press Award for best choreography at the Biennal of Seville. “150 grs. de pensamientos” was premiered at the Flamenco Biennal of Seville 2010. Her last premiere was De un momento a otro at the Teatro de la Abadía de Madrid. In 2011 she has received the Fine Arts Award under the category of Dance of Madrid, Spain.

Rocío Molina A restless dancer, Molina was born in Malaga in 1984. She started to dance at the early age of three years old. At seven, she was outlining her first choreographies. At 17, she graduated with honors at the Royal Dance Conservatory in Madrid and became part of the cast of professionals companies with international tours. At 22, she premiered Entre paredes (Among the Walls), her first work, which was followed by many more self-creations, all of them with a thing in common, a curious and transgressor look at a flamenco style escaping from the well-trodden paths: El Eterno Retorno (The Eternal Return) (2006) Turquesa como el limón (Turquoise as a Lemon) (2006), Almario (2007), Por el decir de la gente (As People Say) (2007), Oro viejo (Old Gold) (2008), Cuando las piedras vuelen (When Stones Fly) (2009), Vinática (2010), Danzaora y vinática (2011), Afectos (Affections) (2012) and Bosque Ardora (Ardora’s Forest) (2014), Caída del Cielo (Fallen from heaven) (2016) and Grito Pelao (2018). At 26, the Spanish Ministry of Culture awarded her the National Award for Dance for “her contribution to the renewal of flamenco and for her versatility and strength as a performer capable of handling the most diverse registers with freedom and courage.” At 28, after her outstandingly successful performance of Oro Viejo (Old Gold), Mikhail Baryshnikov kneeled before her at the door of her dressing room at New York City Center. She’s been associated with the Chaillot National Theater in Paris since 2014 where she premiered in November 2016, Caída del Cielo. She premiere in the Festival d’Avignon in July 2018 Grito Pelao she create with the singer Sílvia Pérez Cruz and Carlos Marquerie.

Gerardo Núñez Núñez was born in Jerez de la Frontera (province of Cádiz) in 1961. His first teacher was Rafael del Águila. At the age of fourteen he accompanied important cantaores and bailaores like Tío Gregorio el Borrico, Terremoto de Jerez, La Paquera and Mario Maya, among others. He has recorded as a concert guitarist and accompanying the voices of Turronero, Pansequito, Indio Gitano. In his triple roles of composer, concert guitarist and accompanist, he has performed in diverse theater shows, the most notable being Mario Maya’s ¡Ay Jondo! and Lorca’s Yerma. He has also performed at numerous music festivals around the world. Afterwards, as a solo artist, Gerardo Nuñez has received excellent reviews, and he is considered one of the best prepared guitarists. He has also performed on several flamenco stages, gatherings and festivals, both at a national level and abroad: Paris, New York, Cologne, Havana, Munich. He has also been part of a guitar quartet, with which he has travelled all over the world, and has played alongside guitarists of international renown like Erico Raba, Alex de Grassi and Briam Gare. Additionally he has collaborated with bassist Eberhard Weber and accordionist Richard Galliano.