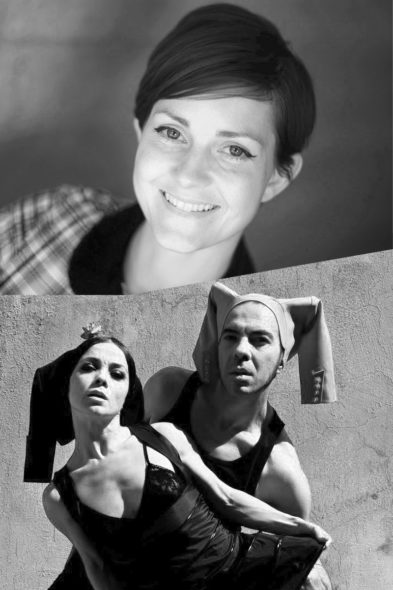 National Dance Prize 2018, is one of the main figures of her generation in the world of flamenco and Spanish dance and is one of the most revolutionary artists of recent times. With absolute technical prowess, she has developed a harmonious and exquisite style, which reveals great plasticity on stage, which awarded her the MAX Prize for the best lead dancer in 2015.

Graduated in Spanish dance and flamenco in Córdoba, she has studied with teachers such as Matilde Coral, Manolo Marín, Maica Moyano and José Granero, among others, and has been a solo artist and guest in companies such as Rafaela Carrasco, Nuevo Ballet Español, Arrieritos, Miguel Ángel Berna, Teresa Nieto, Belén Maya and National Ballet of Spain. He has shared the stage with artists such as Ana Laguna, Nacho Duato, Enrique Morente and other great figures in the world of music and dance.

In 2004 she began her career as a choreographer and soloist with the show “Bolero, Carta de Amor y Desamor”, and a year later, along with Manuel Liñán, she created the show “Cámara negra”. This same year, he created a company, Chanta la Mui, together with Marco Flores and Daniel Doña, who has offered a handful of works that reveal his revolutionary vision of flamenco dance.

On her own, she has created works such as “Rosa, Metal, Ceniza”, “One Piece”, “Footsteps End and Beginning of a Woman” and “Flamenco sin título”, obtaining great public and critical recognition. This recognition includes: the extraordinary prize of the ACE Theater AWARDS 2016, the Ojo CríRNE 2014 award, the Pilar López National Flamenco Award, among others. She finished his classical dance studies at the Institut del Teatre de Barcelona. Later, She placed herself under the command of Catherine Allard in the ITDansa company for two years to complete his academic training studying and interpreting pieces by choreographers such as Ohad Naharin or Nacho Duato. As a photographer he has specialized in live shows: Franco Dragone, Olga Pericet, Cirque du Soleil, Víctor Ullate, Hombres G and Belén Maya.

He began studying flamenco at the age of 3 in Seville. He later expanded his studies of Dramatic Arts and Contemporary Dance at the C.A.T in Seville and later studies Dance Theater and Improvisation in Barcelona under the tutelage of Mercedes Boronat. In Cataluña he created his first works with his company 2D1, which won him various prizes in national choreography competitions. In 2002 he became a professor of Flamenco, Contemporary Dance and Composition at the Institut de Teatre of Barcelona and began teaching workshops in improvisation and composition for Flamenco around Europe. He was invited by Yoko Komatsubara as dancer and choreographer to collaborate on a project at the National Theater in Tokyo. He directed, danced and choreographed alongside Joaquin Cortes in the work “De amor y odio.” In 2004, he was the lead in the first flamenco musical, “Los Tarantos” under the direction of Emilio Hernandez.

His own choreography entitled “El Arte de la Guerra” debuted in the Flamenco Festival of Berlin in 2006. Praised by both critics and the audience, the work lead him to be recognized as one of the current voices of flamenco‟s vanguard. In 2007 and 2008 he co-directed and danced in “Souvenir” and “La Voz de su Amo” alongside dancer Belen Maya. In 2008 he participated in the Biennial of Seville as choreographer for the works “Pasos para Dos” for Rosario Toledo and “El Tiempo Corre y Deprisa” for Cia. Marco Vargas y Chlóe Brûle in their work “Ti-Me-Ta-Ble.”

In 2009 he began curating “Flamenco Empirico” for the Mercat de les Flors in Barcelona , a program he continues to curate each year. In 2010 he directed the work “Bailes alegres para personas tristes”, with Belen Maya and Olga Pericet that was debuted in the Festival Flamenco of Jerez. That same year he directed and danced “Al Toque” in Vienna (Austria): first part of Trilogy on “The Bodies of Flamenco». Choreographed and danced in “Alejandrias: La Mirada oblicua” at the XVI Biennial of Flamenco in Seville. In 2011 he premiered “El Aprendizaje” alongside director Roberto Romei and directed the work “Pajaros de Marfil” for Cia. Belén Cabanes. In 2012 he began the first of his “Acercamientos,” or „approaches‟ for his production “Al Cante”( second part of trilogy). Premiere in Tanzhaus Dusseldorf 2014. In 2013 export “Flamenco Empírico” to Flamenco Festival Sadler ́s Well in London and Directed the piece “Laberíntica” Cia. Marco Flores. In 2014, inside Flamenco Festival Jerez, he danced with Olga Pericet in her piece “ Pisadas” . He premiere in 2016 “Al Baile”: End of Trilogy on “The Bodies of Flamenco».

Since 2018 he has been working on a new project «The Liturgy of the Hours», a 12-hour performance event, which is scheduled for completion in 2021, as part of the new project «Sacred Machines» (Fira Mediterrania, Manresa 2018) and «Twelve» (Mercat de les Flors, Barcelona 2019).

Holly is a Costume Designer and Theatre Designer working between Film, Theatre, Dance and Live Performance.
Following a degree in Fine Art (The Ruskin School of Drawing and Fine Art, Oxford University), Holly began her career working for Angels the Costumiers in London. After an MA programme in Scenography at Trinity Laban, she was a finalist in the 2007 Linbury Prize for Theatre Design.
As a film costume designer, Holly designed ‘Lady Macbeth’ by William Oldroyd, ‘Ginger and Rosa’ by Sally Potter and ‘Departure’ by Andrew Steggall. Prior to this, she collaborated with some of the industry’s finest costume designers on films including: ‘Happy Go Lucky’, ‘Lincoln’, ‘Warhorse’, ‘Another Year’, ‘The Man From Uncle’.
Holly works with some of the UK’s most exciting established and emerging creators in Theatre and Dance, and has designed costumes, sets and installations for productions at The Gate Theatre, The Young Vic, The Almeida, The Royal Court, Scottish Dance Theatre, Sadler’s Wells, Handspring UK and Complicite.