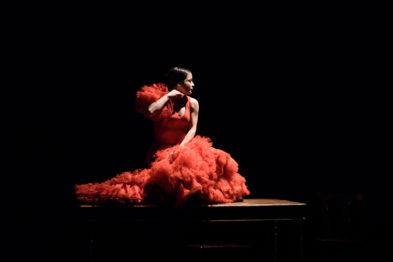 Olga Pericet (1975), National Dance Prize 2018, is one of the top figures of her generation in the world of flamenco and Spanish dance and is one of the revolutionary artists of recent times. With an absolute technical prowess, she has developed a harmonious and exquisite style, revealing great plasticity on stage, resulting her receipt of a Premio MAX for best principal female dancer in 2015.

Holding a degree in Spanish dance and flamenco in Córdoba, she has studied with masters of the art form such as Matilde Coral, Manolo Marín, Maica Moyano and José Granero, among others and has been a soloist and guest artist with companies such as that of Rafaela Carrasco, Nuevo Ballet Español, Arrieritos, Miguel Ángel Berna, Teresa Nieto, Belén Maya and Ballet Nacional de España. She has shared the stage with the likes of Ana Laguna, Nacho Duato, Enrique Morente and other major figures of the music and dance world.

In 2004 she launched her career as choreographer and soloist with the show “Bolero, carta de amor y desamor”, and a year later, together with Manuel Liñán, she created the show “Cámara negra”. This same year, she created a company, Chanta la Mui, together with Marco Flores and Daniel Doña, which has offered a handful of works revealing their revolutionary vision of flamenco dance.

On her own, she has created such works as “Rosa, Metal, Ceniza”, “De una pieza “, “Pisadas fin y principio de mujer” and “Flamenco Untitled”, obtaining great critical and public recognition. This recognition includes: the extraordinary award of the ACE Theatre AWARDS 2016, the Critical Eye award RNE 2014, the National Pilar López Flamenco Award, among others.