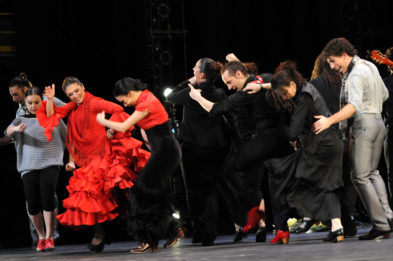 This gala is a sure bet to showcase the art of the latest links in the chain, young artists who have actually graduated from conservatories and practic nonstop so that when the spirit strikes them—the duende, as Gades would say—it finds them rehearsing. They are relative babes, but they are also risk-takers, having worked as choreographers and having created companies of their own. It is up to them to push the envelope in flamenco.

Pastora Galván The daughter of José Galván and the sister of Israel Galván, the star of Pastora, a work created for her by Israel to showcase her gifts, Pastora Galván could only have grown up dancing. One of her first professional experiences took place in 1995, at the age of 15, when she performed with the Company of Flamenco Theatre of San Francisco. The next year saw her in France dancing with her brother´s company. In 2001 she took her own rightful place as a premier dancer, having won the Matilde Coral prize at the Cordoba National Contest of Flamenco Art. Pastora has danced in every main flamenco festival, in the most important Spanish theatres and tablaos, and in many cities in Europe, Japan, the USA, the Middle East, and Cuba. She has participated in the Flamenco Biennial of Seville ever since 1998, when she took part in Israel Galván’s show Mira/Los zapatos rojos. She has collaborated with her brother subsequently in La Metamorfosis (2000), Galvánicas (2002), and Dos Hermanos (‘Brother and sister’, 2004). A truly watershed year in her career was 2006 when in the Biennial she performed in five different pieces choreographed especially for her by Israel Galván, with Pedro G. Romero as artistic director. Pastora premiered La Francesa at the 2006 Biennial. Also in 2008, at the Biennial in Seville, she and Israel danced together in Pedro Sierra’s Tres movimientos. The same year she also performed Cuatro Esquinas, together with Carmen Linares, Miguel Poveda and guitar player Juan Carlos Romero. To round out the year she brought her Cuadro Flamenco to Cairo and Beirut.

Manuel Liñán Manuel Liñán was born in Granada in 1980 and began his dance studies at the hand of such maestros as Manolete and Mario Maya. By 1998 he was ready to join the Carmen Cortés Company with the show Salomé. He was soloist the next year in the show Campanas Flamencas. In 2000 he was a guest artist with Paco Romero´s Company in Cinco Grandes de la Danza and became lead dancer in Merche Esmeralda´s Company. The same year he premiered La casa de Bernarda Alba, directed by La Tati, in which he was assistant director and dance coach.
In 2002 he joined the Rafaela Carrasco Company with the show Música en el cuerpo and was soloist at Festival Los Tarantos in Homenaje a Camarón. Together with Daniel Doña and Marco Flores he created the company ESS3 Movimiento in 2003 and premiered its first show Un Millón de Emociones. The next year he performed together with Belén Maya and Rafaela in Los Caminos de Lorca. Also in 2004 he inaugurated the Lorca Prize in New York with a show by Curro Albaicín. He was soloist in 2006 at the Biennial of Seville and in 2007 at the Nîmes Flamenco Festival and at the Union Festival. In 2008 he collaborated with the Teresa Nieto Company in their production De Cabeza and was invited by Jose Antonio, director of the Ballet Nacional de España, to teach flamenco courses at the Ballet. The same year he toured Hong Kong, China and Australia with the show Gala Flamenca, premiering it at the Sydney Opera House. Manuel has choreographed extensively for other artists, such as Paco Romero, Belén Maya, Rafaela Carrasco, Mario Maya, Teresa Nieto and the Nuevo Ballet Español. He was awarded the “Young Talent” grant by Hugo Boss in 2002. In 2004 at the 13th Madrid Spanish Dance and Flamenco Choreography Contest he won prizes for Solo Choreography and Most Outstanding Dancer for his piece Madame Soledad.

Belén Lopez Belén López was born with her dancing shoes on, and not all that long ago. Born in 1986, the child prodigy first performed in public at age five dancing before Antonio “el bailarín” in a show paying homage to the famous Carmen Amaya, a legend with whom the young dancer has been compared. At seven she won the TV contest “Bravo Bravissimo” and danced together with Angel Corella at the Teatro de Madrid. A beautiful and riveting performer, Belén has won many awards, among which have been the “Mario Maya’s National Flamenco” “Revelation Artist” awards. She has been the prima ballerina at the Arena di Verona for four years and the lead dancer at the “Il Camborio” company and at the “Corral de la Morería” and at the “Corral de la Pacheca.” She has already danced before H.M. Queen Sofía at the Zarzuela Theater in Madrid, at the “Jerez Festival”, the “Biennale Danza e Italia”, Madrid’s Spanish Theater, Madrid’s Círculo de Bellas Artes, the Suma Flamenca Festival, Munich’s Gasteig Theater, Caja Madrid Festival, and Malaga’s Bienal. She professes to be shy and claims that flamenco allows her to express who she really is. At 20 years of age she formed her own troupe, and in its first big production Cuando Amanece (When Day Breaks) she directed, wrote the lyrics and did the choreography. Her troupe´s 2009 production A mi manera (My Way), partly inspired by the Sinatra hit, is pure flamenco, pure passion.

Rocío Molina For someone born in 1984, her list of awards and accolades is noteworthy, award for Most Outstanding Dancer at the XI Certamen de Coreografía y Danza de Madrid in 2002; El Madroño and the Venencia Flamenca el Mistela awards for Best Flamenco Dancer in 2006; The critic’ s award to the Best Dancer 2006 and 2007 by Flamenco de Hoy, award to the best dance show of 2007 to Turquesa como el Limón by Canal Sur Radio, the Press Award to the Best Dancer and the Giraldillo for best choreography at the Seville’s Flamenco Bienal 2008. Molina started dancing at the age of three, and by the time she was 11 she was winning prizes in national dance contests. She began her studies at the Málaga´s Dance Conservatory, and finished her degree with honors. In 2001 Molina joined the María Pagés Company as a dancer and choreographer, touring Italy, Japan, Canada and the U.S., and taking part in the Gala de Andalucía at New York’s City Center. In 2003 she took part in Flamenco Festival USA, performing as a soloist together with Manuela Carrasco, Chocolate and doing a duo with Israel Galván. She premiered her first show, Entre Paredes, in 2005. At the first ever Festival Málaga en Flamenco in 2005, she premiered El Eterno Retorno, based on texts by Nietzsche. In 2006 she premiered Turquesa como el Limón and Dorantes. In 2007 Rocío premiered Almario. Then, during the 2007 “Málaga Bienal” she premiered Por el decir de la Gente, commissioned by José Luis Ortiz Nuevo. She started the year 2008 by participating as soloist in Mujeres together with Merche Esmeralda and Belén Maya. The same year she also premiered Pasos Contados directed by Pepa Gamboa and featuring Diego Carrasco as guest artist. Also in 2008 she danced in Goyesca, together with Carmen Linares, Miguel Poveda and Carmen Cortés, among others, and premiered her show Oro Viejo. In October 2009 she premiered Cuando las Piedras Vuelen, her latest work.