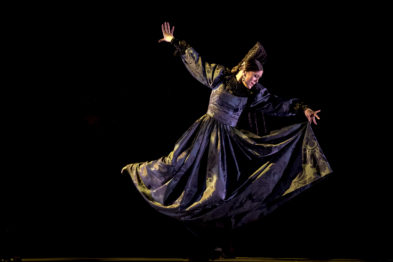 Patricia Guerrero gets acquainted with flamenco dance at home: She begins her first training with three years at her mother’s academy and her learning process has been enriched by contributions from many, very different teachers, assimilating classical dance and classical Spanish dance as well as flamenco dance. That precocity in learning has also had its correspondence on stage. Her first public performance was at the Peña La Platería, when she was only 8 years old. Shortly after, she already shared the stage with Juana Amaya at the Flamenco Festival in the Albayzín. At 15 she joins the Center for Flamenco Studies directed by Mario Maya, with whose company she was touring as part of the cast of Diálogo del Amargo (Dialogue of the bitter one).
A year later she presents her first own show, Desde el Alabayzín (From the Albayzín), touring several European cities with it. At that time, Patricia Guerrero is also requested by Carlos Saura to perform as a soloist in the show Flamenco today, with which she toured the world and performed on stages like the City Center in New York. The prestigious filmmaker counts on her collaboration again for the shooting of his film Flamenco, Flamenco, where she appears dancing guajira, together with Arcángel and the choreographers and dancers Rafael Estévez and Valeriano Paños. In the same year she becomes part of Rubén Olmo’s company to join the cast of Tranquilo alboroto (Quiet riot).

In 2011 Patricia Guerrero becomes a prima ballerina of the Ballet Flamenco de Andalucía under the direction of Rubén Olmo. Of this period, the critics have highlighted the paso a dos where she stars beside the maestro Antonio Canales in Llanto por Ignacio Sánchez Mejías (Lament for Ignacio Sánchez Mejías) and together with Eduardo Leal in Metáfora (Metaphor). At the same time, Patricia Guerrero is still being requested as guest artist by Arcángel for his shows Olor a tierra (Smell of earth) (with the Academy of Piaccere), and Las idas y las vueltas (Comings and goings), a fusion of flamenco and Baroque music for which Patricia Guerrero is awarded the Giraldillo for Best New Artist at the Biennial of Seville 2012. The special collaboration with Arcángel continues currently with the show Tablao, premiered at the Teatro Real in Madrid.

In 2013 Patricia Guerrero premiers her second show Latidos del agua (Heartbeats of water) at the Alhambra Theatre in Granada. The same year she also presents Touché, a new production together with the violinist and composer Bruno Axel, with which she tours major music and dance festivals: Jerez Festival, Festival of Zurich, Düsseldorf, Nimes, Central Theatre Seville, etc.

In 2014 Belén Maya asks Patricia Guerrero to be a part of her show Los invitados (The guests). Other leading figures of flamenco, such as Dani de Morón and Antonio Rey, call her to be part of their shows as a guest artist. In 2015 she presents Doce Tiempos (Twelve tempos) at the Festival of Italica, sharing the stage with contemporary dancer Raul Heras. That same year she dances as a soloist in the Chaillot National Theatre in Paris in the show Cuando sueñan los ríos (When rivers dream).

In February 2016, at the twentieth anniversary of the Festival de Jerez, she presents Pórtico, a piece that gave a preview of Catedral, a show premiered at the XIX Biennial of Seville at the Lope de Vega theatre. In this new proposal she puts herself in the hands of a great stage director, Juan Dolores Caballero. A search of the interior, the physical and the aesthetic.

Catedral has been awarded the Giraldillo for Best Show at the XIX Biennial of Seville.