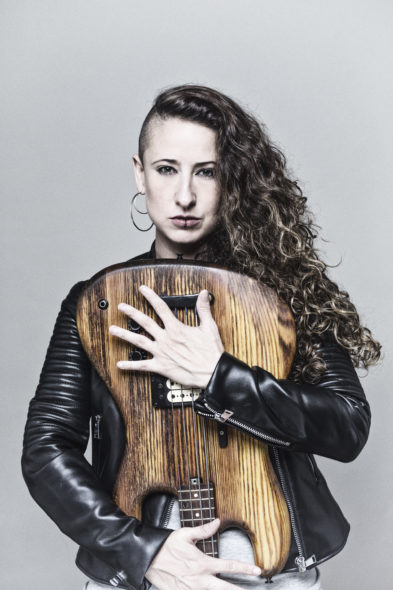 Rosario Guerrero (born in 1984, Triana) is La Tremendita. She is “flamenca” because of tradition, an author because of her vocation and an artist because she loves it. The “jondo” singing quality is congenital for her. Her inquisitiveness is acquired. Being the great-granddaughter of Enriqueta “La Pescaera”, the great-niece of “La Gandinga de Triana” and the daughter of José “El Tremendo”, Rosario learnt the flamenco singing really quickly and she started showing it off as a child in parties and flamenco circles (peñas). Back then, her goal was to be a flamenco singer and, especially, a flamenco singer “de alante” (a lead singer).

That is why all she already knew was not enough for her. She felt she needed to explore the origins of this expressive discipline and expand them. Thus, she did some research on flamenco singing while she studied “solfège” (music education) and piano. As her knowledge increased, she took part in the most important national flamenco contests and obtained numerous awards (Nacional de Córdoba, Antonio Mairena, La Unión), and she put her singing to the service of the most distinguished dancers (Belén Maya, Rocío Molina, Rafaela Carrasco, Andrés Marín).

Flamenco singing for dancers was a pending subject in her professional career, but she passed it with honors. In 2008, after six years collaborating with dancing companies, Rosario eventually decided to focus on her artistic career and so she started investing in herself as a solo artist. This is how she finally displayed her most creative side, her composer side. She has directed shows and shared her talent and creativity on the stage with artists such as Rocío Molina, Mohamed Motamedi and Javier Ruibal. In 2010, the release of her first album “A Tiempo” (“In Time”) was her first big challenge. Her second album “Fatum” was recorded in 2012 and it was nominated to the 15th edition of the Latin Grammy Awards for “Best Flamenco Album” along with Paco de Lucía and Enrique Morente. “Qasida” was her third album. It was a live concert with the Iranian singer Mohamed Motamedi, where Rosario was in charge of the musical direction and created a sound space and a dialogue between the two cultures, an approach between flamenco and Persian music and poetry. This album was an international collaboration project launched by the Flamenco Biënnale Nederland (Dutch Flamenco Biennial).

She is about to release her fourth album now, “Delirium Tremens”. In this project she takes another step towards her inquisitive research by exposing traditional flamenco singing to new, representational, vibrant and harmonic environments. In this artistic work, La Tremendita proposes an audiovisual format where the audience participates in the recording, not as mere spectators, but with an active role. It’s not just a recital, it’s a real recording session with the musicians and the audience integrated throughout the whole artistic process. “Delirium Tremens” is a unique and unparalleled live project in the history of flamenco. In this album, Rosario performs with notable guest artists such as Estrella Morente and Josemi Carmona. In addition, she has co-created the show “Cantahora”, together with Gema Caballero. It is a show where the two artists make their performance without anything else than a few instruments (guitar, electric bass, cajon drum box and bells) and with a restrained but effective and careful staging. She is also part of the new project created by the flamenco dancer and choreographer, Andrés Marín, “Don Quixote”. Despite venerating tradition, this show also creates disorder and challenges dogmas and certainties so that art has a new light. Together these two artists have reinvented a hybrid, carnal, vibrant and provocative flamenco.