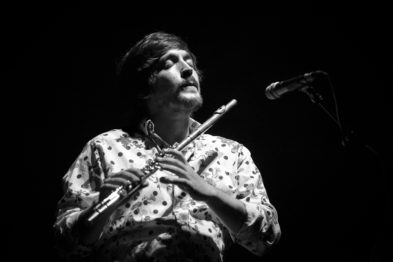 Sergio de Lope and his ensemble are part of the new generation of creative flamenco makers, building veritable bridges between flamenco and jazz.

Sergio de Lope, a flamenco-jazz flutist and saxophonist, was born in 1985 at Priego de Córdoba (Spain). He started his music studies of saxophone at 8 but it is at age 16 when he decides to start on the flute in a self-taught way to play Flamenco. Later, he is a graduated of the Advanced Music conservatory of Córdoba, specialising on Flamencology (“Flamecología”, in Spanish).

In 2017, he has been honoured with the “Filón Minero” Award, the first prize for Best Flamenco Musician, on the 57 th contest of the Festival Internacional del Cante de las Minas at the Murcian town of La Unión. Also, he has been chosen as Mediterranean emerging artist within the framework of Medinea project (Mediterranean Incubator of Emerging Artists) organized by Berklee College of Music, Festival d´Aix en Provence and Casa Árabe.

In December 2015 he published his first album entitled “A Night in Utrera” and he starts the a tour including more than 50 concerts, the main ones being the XIX Bienal of Flamenco in Seville, the Series of Flamenco en Ruta of AIE, Fiestas de San Isidro in Madrid, TV programme Forum Flamenco of Canal Sur Television, Festivals like Utrera Suena, Reunión de Cante Jondo in La puebla de Cazalla, Jazz en la Frontera de Jerez, Lázaro Galdiano Foundation, Una Ría con Duende in Bilbao, Santa María Cathedral of Vitoria-Gasteiz and Radio 3 Concerts of RTVE.