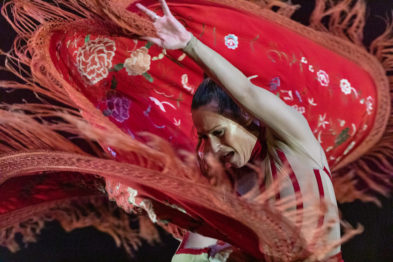 Her passion for the art of flamenco was engendered in a familiar artistic environment at an early age, dedicating her life to the globalization of this art ever since. Siudy swirls other dance genres in new directions with a reverence for the flamenco tradition, turning into one of the most exciting figures in the new order.

“As a choreographer, Garrido blends traditional aspects of flamenco — the rapid-fire footwork, the expressive curvature of the arms and extended fingers, with a sense of modern movement more akin to Martha Graham.”  San Francisco Voice

Venezuelan Dancer, Artistic Director, and choreographer Siudy Garrido, a Drama Desk Outstanding Choreography nominee and Caracas Municipality Choreography Award. Is one of today’s most impressive beauties in the flamenco dance scene. She has been hailed not only by fans, but also by media internationally. “Mesmerizing,” “first-class,” “perfection,” and “a queen” are among the media’s descriptions of celebrated dancer Siudy Garrido. Today, she is recognized worldwide as a barrier-breaking artist, swirling traditional and contemporary techniques into a brand of flamenco that’s entirely her own.

During the first quarter of 2019 Siudy Flamenco Company was featured at the NBC prime-time TV show “World of Dance” executive Produced by Jennifer Lopez.

Garrido founded her own company in Venezuela in 2000 and was forced to migrate to the US becoming Siudy Flamenco Dance Theater. Has collaborated with entities such as Los Angeles Philharmonics and Gustavo Dudamel, The Academy of recording science Latin Grammy’s, Juan Manuel Montoya – Farruquito, Antonio Canales, Argentina, Cirque du Soleil, The Pittsburg Opera and the Simon Bolivar Symphony orchestra.

Since 2000 she has choreographed a half dozen outstanding shows: Caminos Flamencos with a wonderful debut in Disney’s Epcot Center; En Cuerpo y Alma (2003); Bailaora (2005, Honorable Mention of Excellence from the City of Caracas); Entre Mundos (2008) an Off-Broadway run in 2011 nominated for Outstanding Choreography at the Drama Desk; Flamenco Intimo (2013-Present); and El Amor Brujo seen at Walt Disney Concert Hall in 2015, with Gustavo Dudamel conducting.

An energetic and evocative dancer, she has collaborated with pop artists such as Bebo Valdés and Diego El Cigala, Niña Pastori, Alejandro Sanz, and Romeo Santos, among others.

Celebrated for her captivating stage presence, Garrido balances the need to take the art form in exciting new directions while being respectful of the flamenco tradition. This approach maintains the purity of the rhythms and lines of flamenco, while marking her out as one of the most exciting figures in the new order.

Today Siudy is the artistic director of Siudy Flamenco Dance Theater, a non-profit organization established in the city of Miami, since 2015.