This residency meant the cultural rapprochement between flamenco and tap, the dialogue between gypsy culture and black culture from the past to the future, from Africa to Andalusia, from Andalusia to Harlem, from Harlem to the depths of the soul, which is where they are born and where two paths whose meeting seems inevitable, as if from their birth these two dance expressions were made to complement each other. This union had always been made from music (Paco de Lucia, Miles Davis, Chick Corea…), but not so often from dance.

Juan de Juan and Jason Samuels Smith’s residency delved into the sound, aesthetics and choreography, going through the different styles and periods of the ‘hoofer’s’ (as tap dancers are known), and the dancers, showing their evolutionary parallelism from their beginnings to the present time, but leading the interpretation from the respective personal styles of the Sevillian and the New Yorker.

The audience that participated in the presentation of the results of each stage and the subsequent colloquiums have expressed that they were deeply touched by the honesty, humanity and strength of the presentations. 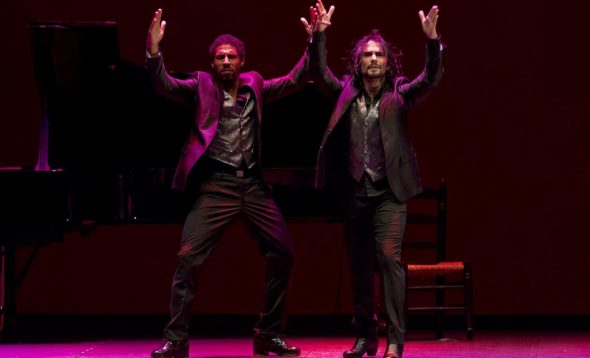 Juan de Juan was born in Morón de la Frontera in 1979. Guided to flamenco by the aficionados of his town, this young man was trained at the Royal Conservatory of Seville, an activity that he combined with the classes of Manolo Marín, Juana Amaya, Juan Ramírez, Ciro and Manolete. However, his great mentor was Antonio Canales, who included him as the first dancer in his company. He stands out for his dexterity with his feet. He has danced all over Spain and in the biggest and most important theaters and festivals in the world such as: City Center of New York, National Theater of Costa Rica, Bellas Artes of Mexico, Teresa Carreño of Venezuela, National Theater of Brasilia, Champs Elysées of Paris, National Theater of Milan, Opera Theater of Poland, Bunkamura Orchard Hall Theater of Tokyo and Sadler’s Wells of London. Some of the most important festivals where Juan de Juan has shown his art have been the Spoleto Festival in the USA, the Athens Festival, the Cairo Festival and the Hong Kong Arts Festival.

Samuels Smith was born in New York City to professional performing arts parents Sue Samuels and JoJo Smith. He began his professional performing career at an early age through Frank Hatchett’s Professional Children’s Program at the Broadway Dance Center in New York City. He won both an Emmy and American Choreography Award for “Outstanding Choreography” for the Opening number of the 2003 Jerry Lewis/MDA Telethon in a tribute to the late Gregory Hines. In 2004, Samuels Smith co-starred in Dean Hargrove’s award-winning short film Tap Heat. He was also a featured dancer in HBO/Universal Pictures release of Outkast’s feature film Idlewild. Debbie Allen has featured his dancing in several productions including the AMC television series Cool Women, Sammy (a tribute to the life of Sammy Davis Jr.), and in 1999 a leading role of Soul Possessed with Patti LaBelle, Arturo Sandoval, and Carmen DeLavallade.