It arises from the need to share the feeling of flamenco, without additives, without old fashioned fixations, keeping its essence but always opening the world to an art that is very alive. Four projects that come together to give more visibility to the Flamenco of Extremadura; each of the components has matured musically with artists from all over the national scene, but the time has come to open its roots outwards. The darkness of the soleá, malagueña abandolaos, cantiña dancing and taranto to lighten up, martinete and seguiriyas al golpe, tango leading up to the joy brought by bulerías and jaleos extremeños, unique, that will leave a lasting impression on you. With no complications nor seeking something foreign, but with the cutting edge of what’s pure, flamenco is invented, but here we don’t want it to be hidden, enjoy something more than a recital, Flamenco Abierto.

Jesús Ortega, dancer, choreographer
Student of figures such as El Maleno of Badajoz, José Galván, Manolo Marín, Eva La Yerbabuena, José Galvám y Rafael Campallo among others. In the year 2000, in the Bienal of Seville in the show “Ritmo”, of María Serrano’s company.
In 2002 he participates as a choreographer in the show “Estrebejí”, produced by the Regional Government of Extremadura and directed by Paco Carrillo, in that same year he becomes part of the “Ballet Cristina Hoyos”. In 2003 after several shows as a soloist around the world, he joins the “Ballet Flamenco de Andalucía”. In 2004 he performs in the Bienal of Flamenco in Seville along with Rafaela Carrasco and Belén Maya in the show ‘Los Caminos de Lorca ́ and begins his facet as a dance teacher giving short courses in Santiago de Chile, Lisbon, Buenos Aires, La Habana and several Spanish cities.

Singer with a sweet voice, well controlled, not without pellizco, with basses full of a rich feeling, with beautiful grace notes dominated by the “duende” or spirit of his art. Fresh, but at the same time keeping what is vital and shouldn’t be changed, but full of new airs full of joy, and a perfect command of the rhythm in the festive songs. Shaped in all the “peñas”, regular participant in festivals and competitions, obtaining awards both from general “cantes” as well as “extremeños”, just to name a few: First Awards in “Concurso para jóvenes” SUMA FLAMENCA in Madrid, EL GALLO in Morón, SOLEARES Award and NARANJITO Award of Triana in Sevilla, Young Singer Award in Chiclana, Llerena, Arroyo de la Luz, MELON DE ORO in Lo Ferro, the SILLA de PLATA in La Fortuna (Leganés), Mayorga de Plasencia, Punta Hombría , and a long et cetera of finals that he has been accumulating at his young age, like Guillena, Burguillos del Cerro, Bailén, Mairena del Alcor, Carmona, Huelva, San Sebastián, etc, which proves that he is an emerging singer with a more than exciting future ahead and with a strong personality.

Juan Manuel Moreno, guitarist and singer
Selected for the official course of the international festival of guitar of Cordoba, taught by Manolo Sanlúcar, Paco serrano, Manolo Franco and José Antonio Rodríguez. He has starred in the guitarist Javier Conde’s company in a world tour. Guitarist for singers such as Guadiana, La Tana, Rubio de Pruna, Enrique el Extremeño, José Méndez, Ramón el Portugués, La Marelu, etc, as well as for a great part of the singers and dancers from Extremadura. Present in festivals such as the Bienal of Sevilla, the Jueves Flamencos in Cádiz, Lisbon Festival, Cata de Montilla Nimes Festival, Womad Cáceres, Mestielx, Badason, among others. A guitar and singing solo album “Dos maneras de sentir” recorded in 2017. Currently, besides accompanying the best dancers and singers of the country, he goes on tours with his two shows, “Flamenco Abierto” and “Dos maneras de Sentir” Sergio García, percussionist. 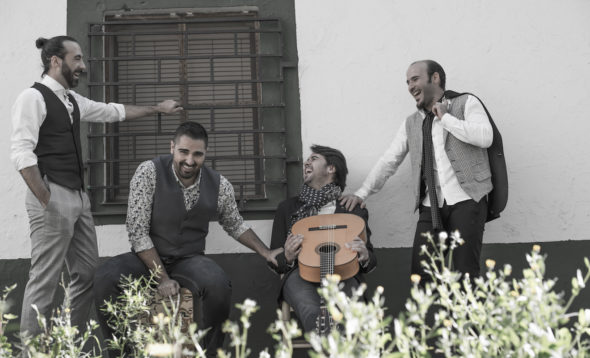