The Gala introduces Carmen Linares, the great ambassador of cante, with her broken and elegant voice that travels wisely across festive beauties or thick darkness: she performs all styles with rare facility, as her expert sensibility enables her to scream or whisper, that depends, sounds and texts of a great poetic and vital reach. An adventurous woman and a deeply committed artist (as well as a devoted mother!), her career has been a long-lasting love story with audiences from half the world. Brought up artistically in the fertile, little environment of tablaos, Carmen Linares became one of the contemporary flamenco myths thanks to her wise evolution: with no hurries, she created an exemplary discography, teeming with research and findings on the old female cante, the best poetry (Borges, Valente) or the echoes of the most modern guitars (Sanlúcar, Gerardo Núñez…). She will be accompanied by Miguel Poveda, perhaps the greatest young genius of flamenco, a sweet and sharp artist that owns a rounded and tinged voice, a very original and focused brain and a huge heart, capable of seducing a block of ice. Poveda is probably the only living proof of a different way of approaching flamenco: he listened to the old tapes of his family in Badalona, near Barcelona, and learned them by heart. Then, when he was 20, he participated in the most important flamenco contest in Spain (Las Minas) and won it without even breaking a sweat. From then on, he has done nothing but growing and enrich the aficionados, who already have him as one of their favourites. When some of them said his cante was missing the nightly element, Miguel found the best solution: he went to Jerez and immersed himself in the world of parties lasting three days in a row. 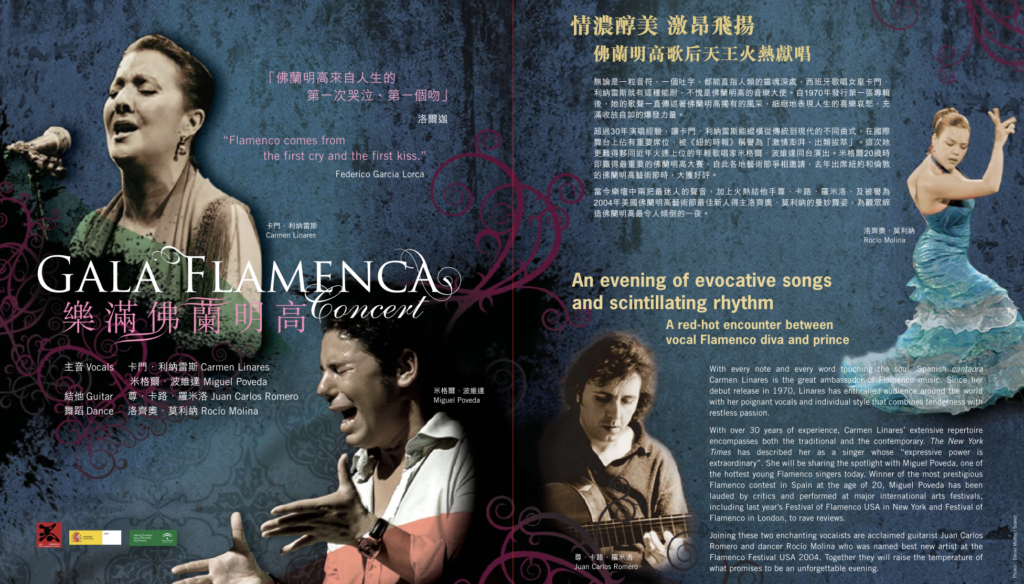