Paula Comitre, Alegrias, Sat June 25. 10.30 am.
As its name suggests, alegrías (joys) is one of the most festive styles of flamenco. It has its origin in the province of Cádiz, being one of the oldest genres, and many consider it as the most important style. It belongs to the cantiñas family, traditional songs from the province of Cádiz.
Alegrías is one of the oldest flamenco dance in this art and has influenced many other styles. Perhaps the most characteristic feature is its rhythm, which it shares with the soleá, although the most significant and which makes this style recognizable, especially for the least understood, is the “tirititrán, trán, trán” with which cante begins.

Maria del Mar Moreno. Bulerias de Jerez. Thr, June 23. 18.hr.
The bulerías is a palo (flamenco subgenre) that is characterized by its vibrant, spontaneous and festive style. The bulerías are an emblematic style of Jerez de la Frontera,
and other fundamental nuclei are Utrera and Cádiz. The most notable characteristic of compás por bulerías is its twelve-beat structure, which is why it is often considered one of the more complicated.
Another peculiarity of the bulería is that it admits all kinds of metrical and musical improvisations, a versatility that is necessary to provoke its cheerful, fun and spontaneous character.

EL YIYO. Tangos. July 2nd. 10.30 am.
Tangos in flamenco are considered one of the basic styles of this artistic genre.
There are several types, among which those from Cádiz, Triana, Jerez, Granada and Málaga stand out.
It is a lively style that, together with the bulería, is part of the cheerful styles recognized as festive styles of this art. 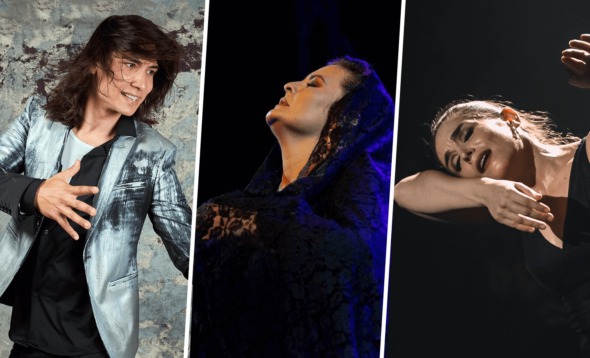