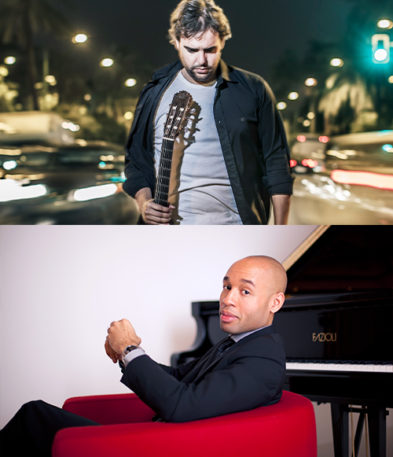 Dani de Morón
No stranger to classical guitar fans around the world, Dani de Morón is one of the up and coming flamenco guitarists in Spain today. He grew up in Moron de la frontera, a Spanish town in Seville province known for its rich Andalucian and Flamenco culture.

As a flamenco soloist and composer, Dani began his concert career when he was very young.

He continued to advance his solo career, winning the Hospitalet Calasparra award in Murcia and the Federation of Flamenco Clubs (Federación de Peñas Flamencas) in Seville. He was also the finalist in the Las Minas de la Unión contest and the Biennial of Flamenco in 2002.

In his varied performances, the acclaimed Spanish flamenco guitarist introduced a combined technique of playing flamenco from the traditional Spanish styles to his personal improvised pieces

Aaron Diehl
Aaron Diehl is the 2011 Cole Porter Fellow in Jazz of the American Pianists Association, receiving over $100,000 in career assistance. Hailed by the New York Times as a “Revelation,” and the Chicago Tribune as “The most promising discovery that [Wynton] Marsalis has made since Eric Reed,”

Aaron Diehl’s distinctive interpretations of the music of Scott Joplin, Jelly Roll Morton, Art Tatum, Duke Ellington, and other masters pays homage to the tradition while establishing his ownoriginal voice.

In addition to the Mozart Jazz trio album, he has recently released Live at Caramoor, from his solo performance at the prestigious festival in the summer of 2008.
His latest trio CD is entitled Live at the Player