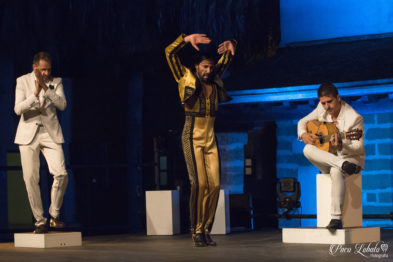 Eduardo Guerrero Gonzalez (Cádiz, 1983) began dancing when he was just six years old at Carmen Guerrero’s School in Cádiz, where he forged the base of his dancing career that he then further developed with professional dancers such as Mario Maya, Antonio Canales or Manolo Marín among others.

He studied Spanish Dance in Cádiz at the conservatory of music, and afterwards he extended his contemporary and classic dance knowledge with David Greenall and Montserrat Marín.

In 2011, he was awarded him first prize by the Professional Conservatories for a choreography he created, called ‘Mayo’. Among the numerous awards that endorse his career, we mention the First Dance Prize of the prestigious Las Minas de la Unión Festival 2013, which marked his consecration. In 2017 his show Guerrero wins the Audience Award of the Jerez Festival. Actually, Eduardo combines his tours with the creation of a new work together with the artistic director Mateo Feijoo (at present director of the Matadero de Madrid). This is a long process of artistic research that forms a trilogy that began with “A Solo Piece for a Flamenco Dancer”, 2016 in Amsterdam, the 2nd “Sombra Efímera” premiered at the Flamenco Biennial of Seville in 2018 and the most ambitious ‘Underfoot’ will be premier in 2019.