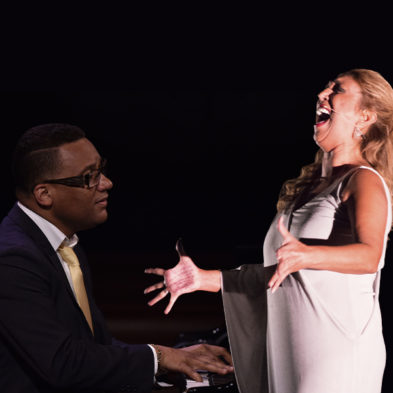 Esperanza Fernández Vargas was born in Seville in 1966. This cantaora found herself in the flamenco arts by listening to her father, also a Triana singer, Curro Fernández. His brother Paco is a guitarist and Joselito is a bailaor, so his entire family is professionally dedicated to the genre. In his beginnings he chose dance as a form of expression, receiving classes from Pepe Ríos and Manolo Marín. But her devotion to Lole Montoya prompted her to excel in singing.

In 1975 she formed together with his brothers the group La Pandilla Gitana, who signed her professional debut. She worked on the show “Amargo” by Mario Maya. In 1994 she was awarded the Andalucía Joven de Cultura Prize. She is an opening singer. She knows flamenco orthodoxy perfectly, but at the same time she searches for other musics such as jazz.

Sir Simon Rattle has called the Cuban jazz pianist Gonzalo Rubalcaba… “the most gifted pianist on the planet” …
Dizzy Gillespie’s  remarks (1985) on first hearing Gonzalo “…the greatest pianist I’ve heard in the last 10 years”…
Charlie Haden once remarked… “Gonzalo is the master of musical structures, he is a smart heart”…
Ben Ratliff, The New York Times “… Meticulous Jazzman of the World”
Howard Reich, Chicago Tribune “… Gonzalo Rubalcaba ranks among the most accomplished jazz pianists in the world today and perhaps stands at the top of that elite group, thanks to a colossal technique and an unfettered musical imagination”
Howard Reich, Chicago Tribune “… Rubalcaba’s pianism is something of a quasi-classical recital, Rubalcaba draws as much from his classic idioms as his jazz lexicon, eradicating barriers between the two, albeit in decidedly contemporary terms. Only a pianist with Rubalcaba’s footing in both classical and jazz orthodoxies could have pulled it off”